Follow 'The Adventures Of Johnny DLT' In Deutsch LA's 'Comigif' 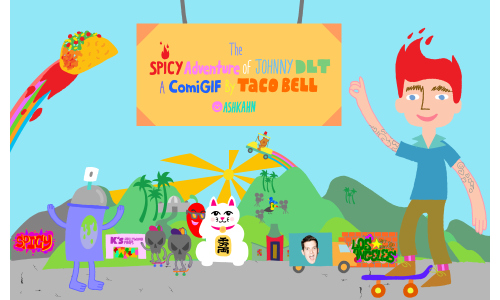 Taco Bell and Deutsch LA have created the worlds first 'Comigif'. That's right, a comic strip made of Gifs!

“The Spicy Adventures of Johnny DLT” on the Taco Bell Tumblr page is all about a skateboarder who really loves his Spicy Chicken Cool Ranch Doritos Locos Taco, the creatures who want to steal it from him, and the people he meets along the way, including electronic music artist Dillon Francis.

The comigif is drawn by LA illustrator Ashkahn. The panels will be posted in reverse order starting at 9:00 am Pacific time today.

This is part of a much larger social push for the new Doritos Loco Taco. It was teased last month in the first Snapchat film from a brand, also created by Deutsch LA. And later this week you’ll see an Internet scavenger hunt giving away custom Taco Bell DLT items like t-shirts.