Event to be held during Edinburgh Fringe festival 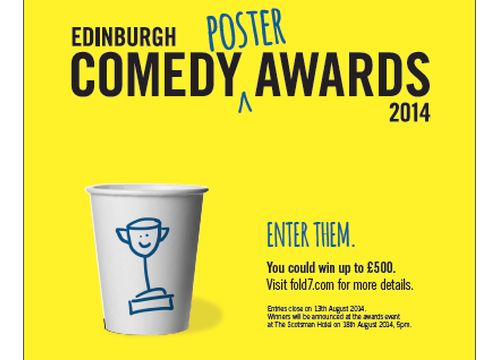 Fold7 is the official sponsor of the first ever Edinburgh Comedy Poster Awards at the Edinburgh Fringe Festival this year.

The Comedy Poster Awards seek to recognise the talented people behind the brilliantly witty and visually arresting posters that advertise the shows of the top comedians and performers at the Fringe.

Fold7’s Executive Creative Director Ryan Newey will judge the entries to the awards and prizes will be handed out at the Edinburgh Comedy Poster Awards Dinner, hosted by Russell Kane, on Monday, August 18th, at the Scotsman Hotel in Edinburgh.

Comedians performing at the Fringe this year include Jack Dee, Bridget Christie, Mr B the Gentlemen Rhymer, and Luisa Omielan. The Fringe will run from August 1st to 25th.

Ryan Newey, executive creative director, Fold7 said: “We've decided to get involved with the Comedy Poster Awards this year so we can sniff out any exciting new talent and make a small tribute by recognising the acts who advertise themselves best. For an unknown comedian the poster has to do a lot of work and we thought it worth putting some up on a wall and saying well done. I'll leave the jokes to Russell Kane.”

Russell Kane adds: “Buzzing to be the poster boy of the poster awards. One thing’s for sure, that night, I'm gonna nail being one dimensional.”

Gina Lyons, the founder of the Comedy Poster Awards, said: “I had the idea for the Comedy Poster Awards whilst chatting to comedian Harry Deansway at last year’s Fringe. I was cracking up at his genius poster (the back was the back of his bald head) and I told him if there was an award for posters he would take first place. So I created one.”

You can enter the awards by downloading the application form here and sending it to competitions@fold7.com before August 13th.