Fold7 Makes Chatty Furniture the Star of the Show for Gumtree 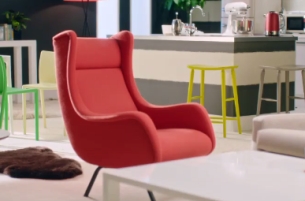 The UK’s largest classifieds website, Gumtree.com, kicks off its Celebrity Big Brother sponsorship campaign, in line with the show's launch, and will make furniture the star of show. The creative idents feature everyday items mirroring the typical antics of Big Brother housemates.

Celebrity Big Brother is Channel 5’s most popular show, drawing an audience of between three to four million viewers every show. The range of twenty-eight idents were created by advertising agency Fold7 and will appear in each ad break on the nightly shows and eviction nights, as well as on ‘Celebrity Big Brother’s Bit on the Side’, and VOD coverage on Demand 5.

Harry Sheward, partner at Fold7 commented: “This campaign is the perfect way of demonstrating how Gumtree can give your household items a new lease of life. By giving the furniture voices and having them mirror some of the behaviour we’ve grown to expect from Celebrity Big Brother housemates, the furniture becomes the star of the show.”

Sam Diamond, Head of Brand and Comms at Gumtree.com commented: “Fold7 immediately understood and shared our belief that the furniture in the CBB house is just as important as the people in it. We’ve had a lot of fun giving inanimate objects celebrity-sized egos, and we’re sure the campaign will reflect the fun nature of the show.”

Rhiannon Murphy, the head of TV at the7stars who helped negotiate the sponsorship deal with Channel 5 and Endemol, commented: "The innovative integration of Gumtree and Big Brother will bring to life how easy it is to do a great deal on Gumtree."

In addition to Gumtree’s idents, integration with the show started in early December, when Gumtree gave sellers the option to offer their items to Big Brother to buy, with over 50,000 items offered to the producers of the show.

From the 15th January viewers will also be able to buy some of the items that have been used by the celebrities in the house and all proceeds from the sale will be donated to charity.

Sam Diamond continued: “We’re so excited to have been able to enhance the most beautiful CBB House ever created with items sourced through Gumtree. And after the winner is announced at the final, CBB fans will have the chance to get their hands on items from the house and own a piece of TV history via the Gumtree platform.”