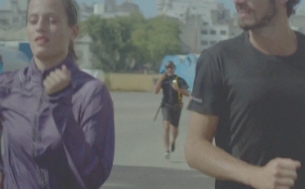 Mizuno has returned to TV screens to present its new concept “It’s Runderful”, which shows the beautiful side of running. Created by F/Nazca Saatchi & Saatchi, the films “Signs” and “Baby Carriage” are the first spots from the advertiser’s institutional campaign and will be shown on cable TV. The brand had not aired commercials on television since 2008.

“Running is, above all, a sport with health benefits and is a way to make friends, get to know your city, see new places and feel good about life. This is the idea we’d like to convey with our new concept,” commented Rogério Barenco, Manager at Mizuno in Brazil.

“It’s Runderful,” a combination of the words Run and Wonderful, expresses the positive voice of the brand, speaking to the heart of all runners without forgetting high performance. It is a concept that shows examples of how this sport provides surprising and pleasant experiences.

According to Eduardo Lima, Executive Creative Director at F/Nazca, “We want to show the wonderful world of running, its characteristics, and curiosities. It is a very rich universe that goes way beyond suffering, waking up early, overcoming obstacles. Running is cool, it’s fun. Interesting things happen while you are running.”

The films for TV are part of the “It’s Runderful” campaign, but the concept may also be seen in print media, with advertisements in major magazines, outdoor advertising, a point-of-sale campaign, and digital activities.

In 2015, the brand will promote two of its own races, which will include several audiences: the Mizuno Half Marathon, (with new categories for pairs and the handicapped), and Mizuno Uphill, a marathon that goes up the Serra do Rio do Rastro in Santa Catarina. The brand also maintains sponsorship of Ironman Brazil and Wrun, a women’s race, and repeats and increases its formula for success with the launch of comfortable products with the latest technology.