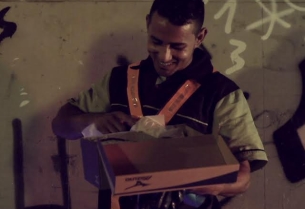 Garbage collectors are true marathon runners of everyday life. They can run roughly 20 kilometers without even noticing. At the end of 2014, Mizuno prepared a tribute for these "invisible athletes." During the week of Christmas, the brand followed the routine of this team through the streets of São Paulo. There were 40 hours of footage and research, streets run, and lots of garbage collected to understand the dynamics of collectors. The result of this project is a mini-documentary that has just been launched on the brand's Facebook page and YouTube channel.

In a piece created by F/Nazca Saatchi & Saatchi, the brand surprised these “athletes,” who run for work but also for pleasure and well-being. Mizuno donated hundreds of pairs of sneakers to these youths who spend almost every day, even Christmas Eve, running through the streets of the city. “They are true marathon runners and don’t even know it. As a brand that invests in and bets on the running segment, we believe they also represent the Mizuno spirit, which seeks to overcome barriers every day. It was a great pleasure to be able to give them the sneakers on a special date,” explains Rogério Barenco, manager of Mizuno in Brazil.