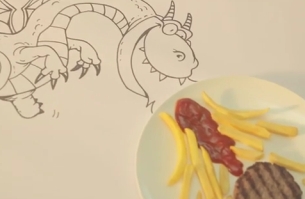 The film “Fantasy Kitchen” by Electrolux launches today. The production presents consumers with the campaign created by F/Nazca Saatchi & Saatchi, which aims to honour Mothers from all over Brazil.

Just like the Electrolux campaign that brought a complete Christmas Eve supper to professionals working on Christmas Eve in 2014 (See it again here), the new production reinforces the brand’s method of capturing the idea of Cooking for Pleasure with memorable sensory experiences.

In order to do this, “Fantasy Kitchen” used Mothers, who are the real consumers of the brand, along with their children. The Mothers and children prepared a meal together, and the children were encouraged to tell stories while an illustrator listened and secretly gave their ideas shape. At the end, when the children recognized the characters from their stories interacting with the dishes they prepared, it reduced the Mothers to tears.

According to Sandra Montes, Marketing Director of Electrolux in Latin America: “The brand has adopted storytelling in the digital environment as a powerful tool capable of contributing to brand building, and generating knowledge and experience for the consumer. Electrolux has invested the most in digital channels over the last three years, with investments representing 10% of the company’s annual marketing budget."