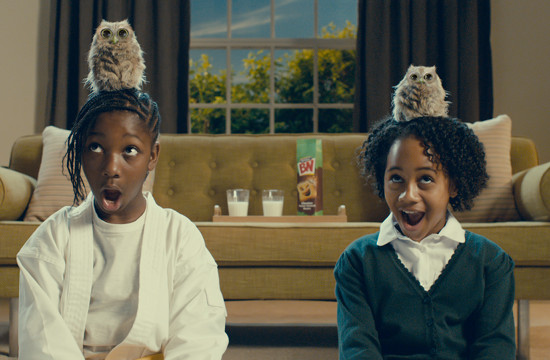 Created by Grey London, with media buying lead by MEC the advertisement will launch 7th July at 8.45pm during Coronation Street on ITV1 and will run until the 1st September across key regional and national channels including ITV1, ITV2, C4, E4 and Sky 1 and will be supported in-store, PR including a summer blogger-led campaign and online marketing, plus a significant push on McVitie’s social media channels.

The advertisement is the latest addition to the brand’s £12million multi-media McVitie’s Sweeet™ advertising campaign launched in February 2014 - the biggest of its kind for United Biscuits to date. The campaign was created to celebrate everyday moments made that little bit better with a McVitie’s biscuit, a sentiment mirrored in this latest advertisement.

Set to the well-known ‘Mnah Mnah’ tune, the 30 second advertisement opens in a family living room, with two children sitting on the floor after school. Mum places a packet of BN biscuits on the sofa behind them and invites them to enjoy an afternoon tasty treat. The packet is opened and out pops a wide eyed baby owl creating unexpected excitement and happiness for a moment before crunching into the crispy sandwich biscuit, enjoying the cheeky wink of a McVitie’s.

Sarah Heynen, Marketing Director of Sweet Biscuits at UBUK, commented: “The McVitie’s Sweeet™ campaign aims to highlight the importance of the humble biscuit in everyday life. The new BN ad continues to illustrate the emotion derived from the biscuit eating moment, a pleasure which Brits have revelled in since the 1830s.

“This latest ad marks another step for the McVitie’s Masterbrand strategy and follows on from the highly successful Sweeet™ campaign launch earlier this year.”

The McVitie’s Masterbrand is now home to all United Biscuits’ Sweet brands (with the exception of go ahead!) whilst all of UB’s Savoury brands, including Cheddars and Mini Cheddars, been re-branded as Jacob’s; a move aimed at simplifying the shopping experience for consumers.