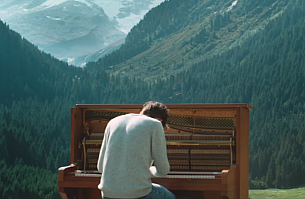 Florian has never officially studied composition. His music does not come from the classroom; it is certainly not rooted in theory.

But it reflects the passion with which Florian Christl creates his music. He just sits down at the piano and lets the compositions flow, giving his creativity and playfulness free reign. ‘Inspiration’ is an album full of love, hope, longing and beautiful melodies.

Florian’s musical journey began during a childhood spent in a small town in Bavaria. He took his first piano lessons together with his sister when he was six years old. Since then, the piano has been his constant companion, and his greatest passion. At the beginning of 2013 he began to perform his pieces live, together with fellow musicians. These harmonious soundscapes of piano, violins, violas, cellos and percussion, with their haunting melodies, have touched and moved audiences from the very beginning.

‘Inspiration’ brings together 13 pieces - recorded on a Yamaha CFX concert grand piano: A selection of unique compositions that have emerged in recent years and were born of improvisation, yet brought together as a body of work by reflecting the same passion. ‘Inspiration’ exhibits some of his work’s richest instrumentation. Without doubt, this album from Florian Christl is a vehicle to express his deepest feelings and it both requires and flourishes with full immersion from the listener.

‘Inspiration’ will be released on the 23rd March 2018, via the ‘Sony Classical’ label. You can watch the official video for his single ‘Fly’ below.