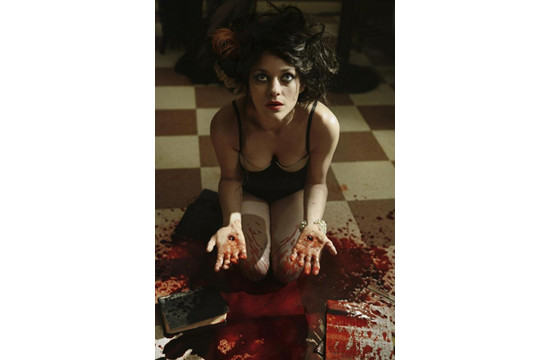 Director Floria Sigismondi delivers her second music video for David Bowie's recent album "The Next Day."  The iconic singer himself wrote and conceived the video for the album's title track, with Sigismondi executing his vision in her signature otherworldly style.  The controversial film was quickly pulled from YouTube, before being reinstated with an adult-only rating.  Although the video doesn't feature any nudity, the graphic religious imagery apparently warranted enough concern for YouTube to temporarily pull the clip.

Sigismondi, who also directed the first Bowie video released of the album, the gender-bending "The Stars (Are Out Tonight)" featuring Tilda Swinton, provides a lushly sacrilegious visual around actor Gary Oldman and Academy Award winner Marion Cotillard.  The story takes place in a bar attended by prostitutes and members of the Catholic clergy.  Money exchanges hands between a cardinal and a redhead, a monk self-flagellates, blood spews from stigmata in Cotillard's hands as she is taken beyond the house of sin, while Oldman as a lascivious priest condemns Bowie, who hovers Christ-like above the carnage, bathed in heavenly light while fronting the band.

"Thank you Gary, thank you Marion, thank you everybody," declares the singer, as the house of sin is transformed into a place of worship.  What the rag tag band is actually worshipping is anybody's guess.

Floria Sigismondi is an acclaimed director, artist, and photographer.  Her directing credits include the feature film The Runaways featuring Kristen Stewart and Dakota Fanning, as well as innumerable groundbreaking music videos for musicians such as Bjork, Fiona Apple, Justin Timberlake, and The White Stripes, as well as commercial work for top brands internationally.  Sigismondi is represented by Black Dog Films for music videos and Believe Media for commercial work.