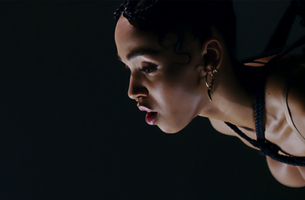 FKA Twigs’ makes her return by releasing the visuals for her track ‘Pendulum’. The stylish promo, which is directed by FKA Twigs through Academy Plus, accompanies the third single from her debut studio album ‘LP1’. Finish Colourist Julien Biard completed the film’s grade.

Twigs is the star of the highly artistic film in which she’s seen tied up and left hanging by her own hair before carrying out her signature choreography.

Julien comments ‘The brief on Pendulum was to create an atmosphere that matches the track - something that’s mysterious – with soft and rich skin tones playing a big part.’

He says ‘It was an interesting project in that the compositor in charge of the VFX supplied me with various Mattes which I could incorporate into each shot, so in terms of workflow the job was quite close to a commercial.  I used a number of techniques to help us achieve the end result, which involved playing with the hue control a lot, as well as working with various shapes and vignettes to control the light.’

Julien adds ‘I’ve worked with Twigs and (Academy Producer) Morgan Clement on various projects, the last one being the Google Glass advert which Twigs starred in. Being part of this team, and being involved with Twigs’ projects, makes me very proud. Working with Morgan is always brilliant, he’s surrounded by amazing creative talent and knowing that you’re going to be a part of that is a great feeling.’

Academy Producer Morgan Clement comments ‘Julien and Cheryl went above and beyond on this particular project and resolved challenges – both technical and creative – in a cool, calm and efficient manner. I think the passion they brought through to the project really shows in the finished work.’