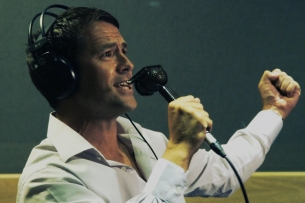 As ITV’s former Head of Creative, sport and comedy specialist Laurie Smith has an outstanding track record in conceiving and executing award-winning promotional and advertising campaigns.  His work for ITV, Sky and BT Sport has seen him direct celebrities including Michael Owen, Kelly Brook, Ray Winstone and Cheryl Cole.

Richard Oliver is one of the UK’s top commercial directors, specialising in alcohol and automotive sectors.  Hugely experienced with a distinctive, graphic visual style and an impeccable ear for sound-design, he also brings his own unique brand of humour and sensitivity to performance resulting in some of the most beautifully crafted and funny commercials around today. He’s produced stunning work for the likes of Mercedes Benz, Land Rover, Toyota and Chivas Regal.

Paul Quinn specialises in branded and commercial content.  His idents and branding for ITV and Channel 4, including The X Factor and Downton Abbey, plus his work for brands such as Coca-Cola, UKTV and The Guardian have earned him six Promax Gold and Silver Awards plus a Bronze Award from Cannes Lions 2013.

The Wylson Brothers, Ben and Jake, are an award-winning directing duo who specialise in travelogue, documentary and story-telling and have worked for the likes of Harrods, Microsoft, Barbour and Ben Sherman. Last year their feature ‘Mahout: The Great Elephant Walk’ won Best Film (UK) at the London Independent Film Festival.

Finally, Angus Wilson is a visual effects guru having worked on everything from the 007 movie Die Another Day to the Emmy Award winning Walking with Dinosaurs. Himself a two-time Emmy Award winner for his work on Hallmark’s Merlin and Alice in Wonderland, he is making the move into direction in partnership with Maker’s Creative Partner, Nick Marchant.

Thea Burrows, Maker Managing Partner, said, “It’s exciting that we can offer our existing and future clients an extended pool of Maker directing talent. We’re delighted that they’ve chosen to be represented by us as they are all exceptionally talented.  We’re committed to supporting and developing their talent through a close working collaboration which will ultimately result in brilliant work for clients.”