INFLUENCER: Director of Business Planning Gully Flowers on the wonders brewing within the MIT Media Lab 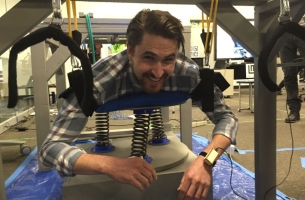 The MIT Media lab is known for pioneering disruptive technologies. With success stories such as E Ink, Lego Mindstorms and Guitar Hero, they’ve built a formidable reputation over the past 30 years with a track record of technological breakthroughs and successes.

I recently spent a few days in the Lab, and what impressed me most was not just what they were creating, but how they were going about creating it. They invent by taking action. They hack cheap and accessible materials together to efficiently and effectively bring ideas to life. They don't pontificate and sit in meetings for days and weeks on end. They just get busy creating.

Here are my eight favorite discoveries from the wonders brewing within the MIT Media Lab:

Scratch was built to lower the barriers to entry for coding and computer programming. It’s a free platform and online community where kids (or anyone looking to learn about creating on a computer) can build and share interactive stories, games and animations. It was built as a stepping-stone to the exciting and complex world of computer programming, and it teaches the basics of coding, as well as positive ways to collaborate.

You can try scratch here.

This project harkens of a future where anyone can be Iron Man and where our physical limitations are overcome and augmented by machines. LineFORM is a "smart wristband" device that is somewhat like a robotic snake—flexible in both form and function and capable of acting as both an interface and a display. For example, LineFORM snaps on your wrist automatically, but also shifts into the shape of a phone for making a call. Or it can morph into a dial or track pad, help you design shapes or teach you to punch like a UFC fighter. Wonderfilled and limitless.

You can learn more about LineFORM here.

3. Virtual Reality With An Added Dose Of Reality.

As VR technology becomes more and more prevalent (read: New York Times launching VR platform) the folks at MIT’s Media Lab have been looking for ways to harness the technology. One of the most interesting applications was Aqua VR, a rather large contraption that suspends the user while they ‘swim’ around in the virtual space. One of the most impactful parts of this was actually the simplest. The user lies down on a cooling mat, which actually gives you the feeling of being cold and wet. So from a tactile perspective the user actually feels like they are submersed underwater. The content was cool, but the physical immersion was the true standout in this experience, and something we can no doubt expect to see in a more prevalent VR world.

This is definitely the most bizarre project I saw, once again reminding me of Iron Man. This contraption is created to provide USB power by using your blood flow to turn a turbine. Yes, it sits inside your chest, and as your blood flows through your aorta (and the turbine) it creates power, which can be tapped into by any USB cable. Here’s a video of it’s creator explaining how it works shot by my colleague Michael Liu:

Back in February, researchers from Cornell Medical College completed an expansive, 18-month long study throughout New York’s Subway to identify and study urban microbiology. The scientists were able to identify hundreds of types of bacteria, however were unable to definitively map where the specific strains of bacteria could be found. MIT Labs felt they had a solution. By tapping into the existing populations of urban bees present in most cities and analyzing the bacteria found in their hives, they were able to accurately paint a picture of a microbiological ecosystem within a defined area thanks to the natural restrictions of a bee’s operational radius. Who knew!

NHK and the MIT Media Lab team showed off an 85-inch LCD 8K TV with 22.2 sound that is sixteen times better than your regular old HD TV. They created special content for the demo, which showcased plants growing (you could see every single hair on these tiny plants), a tennis match and open-heart surgery. With technology like this, and screens becoming even more pixel dense, it’s going to be both an exciting time for content creators looking to expand creative expression, and also a headache for developers and Wi-Fi providers trying to satiate consumers that will expect nothing less than instant delivery.

You can read more about NHK’s 8k TVs here.

7.  Clothing That Adapts To Your Body’s Feedback

Props go to New Balance for one of the more interesting projects--workout gear that ventilates you as you sweat. Working with the Labs Tangible Media group, the project focuses on harvesting certain biological cells and assembling them with a micron-resolution bioprinting system to transform the material into a responsive fashion. This “Second Skin” reacts to body heat and sweat, causing flaps around heat zones to open, enabling sweat to evaporate and cool down the body.

You can see how it works here.

I’m an audio nerd so I saved my favorite discovery for last. ListenTree uses a specialized audio exciter transducer to transform a tree into a living speaker, channeling audio through its trunk and branches. As you approach a tree you might feel some vibration or hear something faint and then once you get up close the magic begins and you can feel and hear sound through bone conduction.

Maybe it’s the kid in me that loves the idea of talking trees, but something about making a tree into a speaker is just awesome. It is a beautiful example of the simple yet impactful and creative way that the incredibly talented folks at MIT’s Media Lab are pioneering a better world for us all.

You can find out more about Listen Tree here.