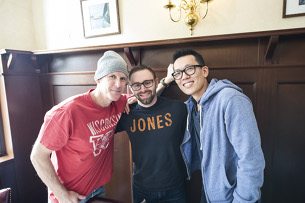 Michael Ferdman, Founder and CEO of award-winning digital creative agency, Firstborn, announced today he will be leaving the company he founded in 1997 and handing the reins to longtime employee, Dan LaCivita, Firstborn's President since 2010. Michael will leave Firstborn effective June 27th after more than 18 years in the business, and Dan will take over immediately to run the shop in close partnership with Chief Creative Officer, Joonyong Park, who came on board in 2004.

Dan joined Firstborn in 2003 as a Flash developer. From there he worked his way steadily through the ranks as an executive producer, SVP and ultimately, to President. Dan has played an integral role in Firstborn's growth since joining, helping to transition the company in its earlier years from a team of digital production specialists to a full service digital agency working directly with some of today's leading brands. Today Firstborn boasts over 100 employees and approximately $30MM in revenue with a client roster that includes Mountain Dew, L'Oreal Luxe, All Nippon Airways (ANA), Amazon's Audible and Pepsico.

Dan's role elevated significantly in the years before Firstborn's 2011 acquisition by parent company Dentsu and continued to accelerate afterwards. For the past several years he has both led day-to-day operations and provided strategic leadership. Dan has worked alongside Michael to prepare the agency for a smooth transition and its next phase of growth.

Michael leaves Firstborn on an upswing - with 2015 marking the best start to any year in Firstborn's 18-year history. He has no immediate plans upon exiting advertising beyond spending quality time with his family when he isn’t playing golf, hockey or basketball.

"I started Firstborn with $200k and the drive to build a company that would be all about the people, the culture and the work.  And when Tim Andree [of Dentsu] approached me I had no plans to sell. But I had been looking for opportunities to give Dan and Joon greater leadership within Firstborn and Tim’s vision for what they could accomplish together gave me the chance to put them at the helm and develop a personal exit strategy. Dan and Joon have always been the future of Firstborn--the people that would make sure our culture, values and ethic remained intact long after I left. "Our employees and our clients are all 100% comfortable with this transition as it comes as no surprise; no shakeup. I have been consciously taking a backseat for some time now.  And as I leave the company I have dedicated the last 18 years of my life to, there is nobody I could be more comfortable handing the keys over to than Dan."

"If there is one thing I have learned from Michael (and I have certainly learned many) it's that building a great company is never about one person. If you build a solid team with strong leadership, that will be the thing that keeps the company thriving for years to come. I look forward to seeing senior team members develop to take on even greater leadership roles within the agency as part of our plan for future growth,” explains LaCivita.

“Michael has left us with the most solid of foundations and instilled in all of us such strong values that we now have the benefit of being able to build from that. I have been fortunate to experience Michael's generosity, friendship, leadership and mentorship for over 10 years now. And while he will be sorely missed by all of us, Firstborn's traditions, spirit and future success will no doubt mirror his presence.  Of course, we look forward to random Michael office pop-ins donning his Firstborn hoodie and beat-up hockey stick."