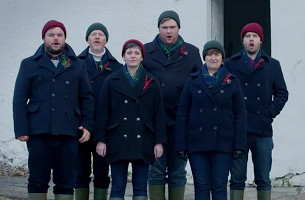 Laphroaig is a single-malt Scotch that spurs rather wild reactions when sipped for the first time.

Along with its agency White Label UK, the brand has been gathering these reactions for the past year, and has now turned some of the best into renditions of Christmas carols performed by a Scottish choir. Some are positive (“Salty smoke tastes like liquid pastrami. It’s unbelievable.”). Some not so much (“It’s like being kicked in the face by a horse that’s been galloping in a peaty bog.”). They are all, however, really amusing and really enjoyable.

Also check out the behind the scenes below.