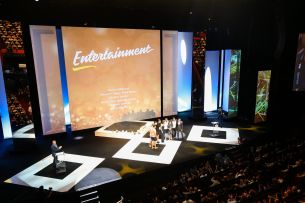 The Entertainment Lions were narrowed down from 1,843 entries to 61 winners with “The Displaced” for The New York Times, NYT VR app, resoundingly claiming the Grand Prix. This virtual reality experience, from Vrse.works was honoured by the jury for its experiential power, placing viewers directly inside the global refugee crisis and signalling VR’s arrival into the mainstream. Jury President, Jae Goodman, Chief Creative Officer & Co-Head of CAA Marketing, said, “ The New York Times embarked on The Displaced as far more than an extension of their editorial platform, and in doing so they have catapulted their brand forward. To our jury, that made it worthy of the first-ever Entertainment Lions Grand Prix.”

The new Entertainment Lions for Music, recognising original production, promotion or distribution of music for brands and creativity where music is at the core, saw 636 entries, 32 Lions and a dual Grands Prix. The first went to the “Formation” music video by Prettybird for Beyoncé and was selected for its creative bravery to challenge social issues through popular culture.

Jury President, Josh Rabinowitz, EVP/Director of Music, Grey Group, said, “The video is so compelling that it not only succeeds in demanding your attention, but also helped to establish Beyoncé as an artist who pushes the boundaries of creativity and challenges the archetypal pop star image.”

A second Grand Prix was awarded to “Home for Christmas” a branded short film with an original composition for Edeka Zentrale & Co by JUNG von MATT. The musical work embraces impactful storytelling to create a powerful brand message.

The Festival concludes tomorrow with sessions including: How Risk-Taking Ads Helped Justin Trudeau Become Prime Minster, hosted by Bensimon Byrne and The Future is Rebellion, hosted by DigitasLBi.