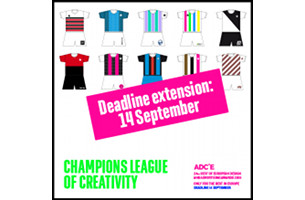 The Art Directors Club of Europe (ADCE) has revealed the judges for the 24th ADCE Awards, celebrating the very best of European Design and Advertising.

Under the leadership of ADCE President Amir Kassaei, Chief Creative Officer of DDB Worldwide, the first 2015 Presidents are as follows:

The lead judges for the Film & TV and Integration & Innovation categories will be announced in the following weeks. In total, 50 leading creatives and designers have been selected from the 18 ADCE member countries to judge the 24th ADCE Awards, and the full list can be found at the ADCE website.

The Champions League of Creativity

On 15 October, the six juries will meet in Barcelona to debate and discuss the best creative work from across Europe, before awarding Gold, Silver and Bronze across each category, as well as the overall Grand Prix, which in 2014 was awarded to Germany’s Heimat Werbeagentur GmbH for The Hornbach Hammer. Winners will be announced at the ADCE Awards Gala on October 17.

Global Chief Creative Officer at Leo Burnett, Mark Tutssel, was a Jury President in 2014 and reflected on the experience: “It’s always a joy to immerse yourself in the best creative thinking from the region and find those ideas that really do stand out. This festival attracts the very best work from Europe and it didn’t disappoint. In particular, we saw 2-3 campaigns with true world class merit that I think everyone will be able to learn from.”

Winning work will be showcased in the ADCE Annual 2015 and through a touring exhibition around Europe. The ADCE Awards also provide the opportunity for entry into The CUP, the prestigious trophy from the Intercontinental Advertising Festival. The CUP is only open to finalists and winners from the top continent advertising competitions: AdFest, FIAP, The Golden Drum and ADCE.

Once again, judging of the ADCE Awards will take place during the European Creativity Festival, which returns to the Disseny HUB, Barcelona from 15-17 October. Created to celebrate and recognize the art of creativity, graphic design and new creative solutions, the European Creativity Festival features a packed programme of lectures, creative panels, exhibitions, and networking opportunities, before concluding with the ADCE Awards Gala.

Tying into the 2015 Awards, this year’s theme will be the “Champions League of Creativity”, with the full line-up of speakers and ticket information to be announced later this month.

Deadline for entries extended until 14 Sep

As a non-profit organization, the ADCE Awards are unique in offering significantly reduced entry fees to ensure agencies of all sizes from across Europe have the opportunity to participate. Entry is free to all Gold winners from eligible national shows, 100€ for Silver winners, and 170€ for all other awarded work (Bronze, Shortlisted etc). Registration is also open to winners from non-member European nations for a general fee of 270€.

Submissions can be made online until 14 September 2015 at http://adce.submit.to, with any physical material also received at the ADCE Barcelona office by this date. More information on rules and eligibility for the 24th ADCE Awards can be found here.