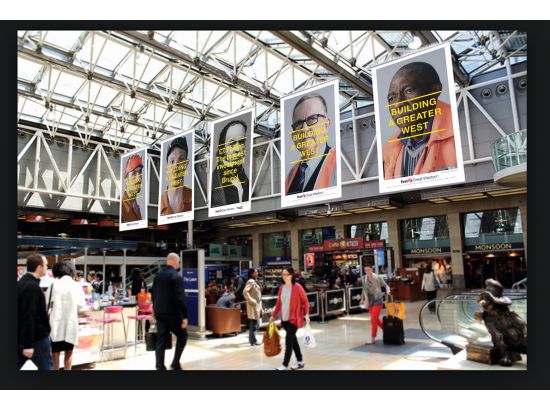 First Great Western has unveiled a new campaign that launches this week. The campaign promotes a £15 billion investment, the largest investment in the railway since Brunel built the Great Western Railway 176 years ago. The investment will improve the journeys of ‘Great Westerners’ across the West of England by providing a faster, more reliable service.

Created by McCann London who won the account in February 2014, the “Building A Greater West” campaign features a series of portraits of the people who are playing a part in the railway’s rejuvenation. From engineers to customer services advisors, technicians to station supervisors, every employee at First Great Western has a part to play in ‘Building A Greater West’, and are featured in the ads.

The campaign also illustrates that the investment is more than just an investment in the rail service; it’s an investment in the optimism, confidence and prosperity of the whole region and everyone in it. They are not just building a greater railway, they are building a greater west. Striking images of the region’s landscapes are used in the campaign, and promote the new facilities that the improved railway will feature such as better stations, more seats, and Wi-Fi across the network.

The campaign runs across a variety of media including across press, radio, digital and OOH, and will run for one month.

Diane Burke, Sales and Marketing Director at First Great Western, said: "We were extremely impressed with McCann London's interpretation of the brief and are very excited about the 'Building A Greater West' campaign. Seeing the work go live has given our whole organisation a similar sense of pride to the one that the work aims to imbue in our customers."

Laurence Thomson, Co-President and Chief Creative Officer, McCann London, said: “We are extremely proud to work with First Great Western and it is very exciting to be part of the biggest investment in the west of England since Brunel first built the railways.We wanted to communicate how this investment and modernisation will have a positive effect, not just on the efficiency of the railway, but on the region as a whole. First Great Western are also one of the West's largest employers. It's their people who will be physically making the transformation, so we created a campaign that put the people and the region at its heart. ”