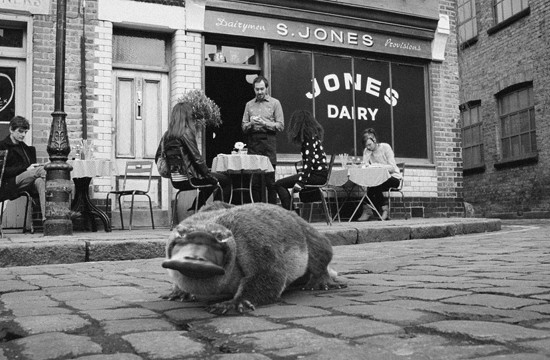 Created by JWT London, campaign launches with a series of 10 second teaser TV slots and outdoor media on 22th May with the 60” TV commercial airing on 27th May. It will run in the UK through to November and is the first major campaign that the bank has run in recent years.

JWT London worked with visual effects company MPC to bring the star of the ad, a talking platypus, to life.  Barry, as he is fondly known, is seen walking through his neighbourhood, meeting up with curious friends and advocating first direct along the way.

In the outdoor and online banners, thoughtful philosophies and reasons to believe statements bring the bank’s personality to life.

Lisa Wood, first direct’s Head of Marketing commented: ‘It’s turning into quite a year for us at first direct.  We recently put our name to the first direct arena in our home town of Leeds and now we’re back on TV with a great new campaign which highlights the un-bank like nature of the brand.

‘The aim of the campaign is to show customers there is an alternative to the high street banks, highlight why we’re different to a wider audience and also reconnect with our loyal customers in a more physical form.’