Wednesday night in Cannes was a busy one! The night was set up to celebrate the arrival of the 10th anniversary of the Fireflies ride in ......... 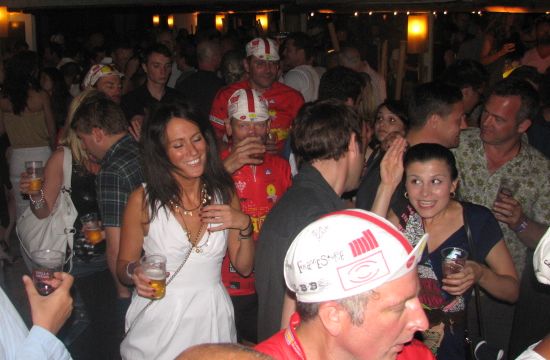 Wednesday night in Cannes was a busy one!

The night was set up to celebrate the arrival of the 10th anniversary of the Fireflies ride in Cannes. Their goal: to reach a total of £1,000,000 raised for The Leuka trust. Their motto: For those who suffer, we ride. And suffer they did! Seventy five brave riders faced snow, rain, ice and 1000km over the Alps to reach Cannes from Geneva on bikes! The founding fathers of the charity ride actually rode all the way to Cannes from Hammersmith Hospital in London!

La Plage Courage was set up as a place to network and chill out as well as to raise funds for and awareness of this fabulous cause. The least we totally lazy and inadequate people could do was throw the Fireflies a party! The event was sponsored by our great friends at Rushes. Thank you to Joce and her great team!

The party went late and got emotional! The beach was packed with happy campers who danced till the early hours. Beats were courtesy of DJ Von ‘The Don’ Adams who entertained La Plage Courage all week. Back in the UK, Von is one of the commercial and promo industry’s most well known sound and video playback technicians and a sought after DJ. We were then treated to a special appearance of the live act Philthy Collins and the Blazing Saddles, made up of some of the UK’s brightest directing talent (on drums: Phil (Philthy Collins) Sansom, Director, HSI; on keyboards: Dougal (The Finger) Wilson, Director, Blink; on vocals and lead guitar: Olly (Van) Williams, Director, HSI; on bass: (The ladies love) Mike Allen, Photographer; manager: Phil (Harvey Wankstein) Tidy). Both acts are planning a return to Cannes in 2011!

Suffice it to say that the party rocked and all Fireflies were suitably rehydrated!