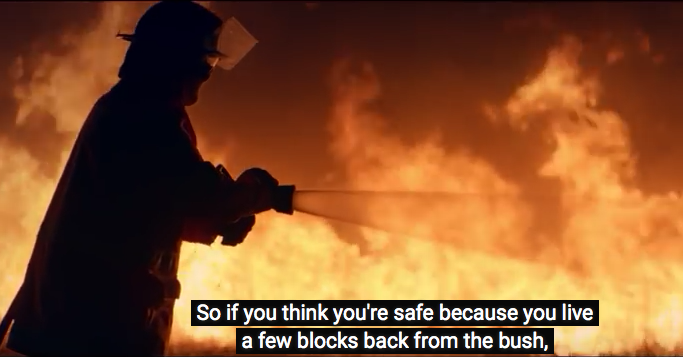 “Research has shown that most people, even some of those living in high risk areas, do not consider themselves to be personally at risk from bush fires. Around half of those in at-risk areas believe their property would survive a bush fire, even if they had made no preparation,” explained NSW Rural Fire Service director of corporate communications, Anthony Clark.

“But the reality is that bush fires are an annual threat across NSW. There are approximately 1.3 million properties at risk from bush fires in NSW, occupied by around 3 million people.  The NSW RFS needed a high-impact, attention grabbing campaign to reiterate that there is a very real risk for many people, and that simple steps like having a conversation can make a big difference”.

J. Walter Thompson executive planning director, Angela Morris explains the strategic approach: “We needed to reframe risk and discovered that people are less afraid of a risk they think they have some control over and more afraid of risks that are personified than anonymous.”

As J. Walter Thompson ECD Simon Langley explains: “Entitled ‘Fire has a plan’, this campaign makes it brutally clear that since fire has a plan for your destruction, you also better have one for your own protection.  The creative approach of personifying fire as a sinister force that knows exactly what it’s going to do and how it’s going to do it, was developed to make people feel personally at risk. Combined with compelling facts about what fire is capable of, including how easily and quickly it can move and take down homes, we hope it will drive NSW residents to get prepared for the upcoming bush fire season.”

The integrated campaign will run and evolve over the next three fire seasons (2015-2018), and comprises a 60” TVC, 2x 30” TVCs, 2x15” TVCs, a bespoke pre-roll, print executions, digital banners and radio spots. Each individual element has been created to highlight specific bush fire dangers and simple actions people can take to make themselves safer.

To support the TVCs and other campaign elements, GPY&R was appointed to develop a new bespoke online hub www.MyFirePlan.com.au. The hub helps people quickly and easily assess their risk and gives them simple, clear and easy tasks to reduce their risk. The tasks are tailored to their risk profile and provide information in formats and timeframes designed to motivate them to act, help them learn quickly and change their future behaviour.

J. Walter Thompson Sydney has worked with NSW RFS for the past three years to make residents of NSW aware of the very real risk of bush fire and take simple actionable steps towards protecting themselves and their homes. This next powerful creative platform takes another step in continuing to prepare residents of NSW.