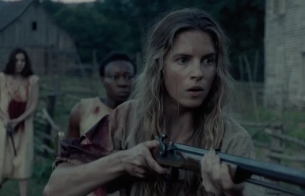 Finish has completed over 90 VFX shots and the title sequence on director Daniel Barber’s latest feature release The Keeping Room, a Western Thriller set towards the end of the American Civil War.

Released by Drafthouse Films in the US on September 25, 2015, the film is a tense and uncompromising tale of survival that also shatters both gender and genre conventions. The film stars Brit Marling, Hailee Steinfeld, Sam Worthington and Muna Otaru.

Visual Effects Supervisor Jason Watts worked closely with long time collaborator Daniel Barber in devising the effects for the film. “To work on a long form project with a director I have a long standing working relationship reaffirmed our collaborative synergy” comments Watts, “There was a lot of trust in delivering creative shots that were an essential part of the story telling.”

Specific visual effects were added to intensify the mounting tension as the story progresses with skies set ablaze with CGI cloud systems, CGI crowd simulation to replicate troops, smoke, impacts and bullets added to discharged gunfire plus numerous invisible effects throughout the film.

CGI artist Alaric Holberton explains the effects for the main battle scenes. “In one of the scenes the sky needed to look like it was ablaze from distant battles. We graded the plate darker, created illuminated sky passes then a Maya fluid cloud system would catch the light from below and change structure to look like thick battle smoke rising up from the ground. Along with the pulsating glows of the main fires quick flashes from explosions and artillery fire were added to show the fighting was on-going.”.

Click here to view some VFX before & after stills.

Watts also goes on to comment, “I had a small team of people working on the project and I was most proud of seeing the names of once junior staff credited on the end titles.”

Finish have worked with Barber on numerous commercials over the years for clients such as BMW, Ford, Lloyds TSB, British Airways, Jaguar, British Heart Foundation and also completed all the VFX on his Academy Award nominated short ‘The Tonto Woman”.