Esse is one of the APAC region’s best-known EPs 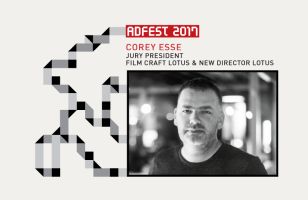 ADFEST has announced that Corey Esse of FINCH is joining an elite panel of Jury Presidents at ADFEST 2017, which runs from 22nd – 25th March 2017 in Pattaya, Thailand. Esse will lead the Film Craft Lotus and New Director Lotus jury.

As Managing Director and Executive Producer at FINCH, Esse is one of the region’s best-known EPs, overseeing FINCH productions in New Zealand and Australia.

“Leading the Film Craft and New Director jury is a big responsibility – especially as ADFEST is turning 20 next year – but it’s a responsibility I’m looking forward to. Some of the most experimental, interesting films are made in Asia, so I think ADFEST 2017 is going to be a good barometer for what lies ahead in our industry,” says Esse.

In 2010, he joined Fallon Minneapolis as Head of Integrated Production and oversaw transmedia projects for blue-chip clients including Cadillac. After three years in the US, Esse returned to Australia as Managing Director and Executive Producer at EXIT Films where he oversaw the globally awarded campaign ‘Remote Control Tourist’ for Tourism Victoria.

“Corey’s collaborations with world-class Creative Directors have been recognised all over the world, winning Lions, Best of Shows and Grand Prix prizes. Most importantly though, Corey is passionate about the craft of filmmaking, and we’re honoured he’ll be sharing this passion at ADFEST 2017 as a Jury President,” says Jimmy Lam, President of ADFEST.