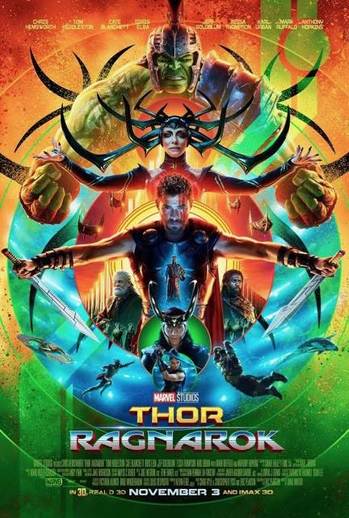 With its strong tradition of using visual effects to illuminate a story, Fin Design + Effects was selected to complete a key sequence in the latest Marvel Universe blockbuster, Thor: Ragnarok.

When Thor is taken prisoner on the planet Sakaar he is forcibly hauled through an Epcot-style induction tour explaining his new destiny as a gladiator. Production supplied only foreground footage of lead actor Chris Hemsworth's performance against bluescreen, tasking Fin with designing and rendering the intergalactic theme park world around him.

ride finale, exercising the breadth of Fin's VFX pipeline in the process.

bleachers of an arena. In another scene, Thor, strapped into a CG chair, flies past planets and galaxies made into holograms via heavy image treatment in Autodesk Flame courtesy of lead compositor Justin Bromley, backed up by a team of Nuke artists.

Alastair Stephen, executive producer, Fin, said: "It's great to be asked to bring Fin's 16 year heritage of visual storytelling to bear on such a creatively open brief as this one.

"We were honoured to be selected as a vendor on this show and seeing our images contribute during such a pivotal story beat is always a great thrill for the talented artists here at Fin who all worked so hard on the film."
view more - Creative