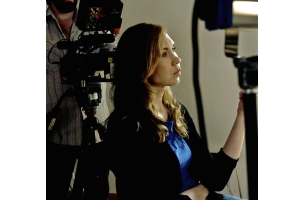 Filmmaker Melissa Johnson, who won the prestigious Abu Dhabi Film Festival award for Best Short Documentary with “Love In The Time of March Madness,” which she wrote and co-directed with Robertino Zambrano, has signed with Mechaniks, a production company based in Venice, CA, for commercials representation.

“We’re very pleased to have a director of Melissa’s caliber on board,” says Andrea Kikot, Mechaniks Executive Producer. “She’s a rare talent who combines her love of sports with great insight into the heart and soul of the characters she brings to the screen.”

Johnson’s previous documentary “Brittney Griner: Lifesize” followed the basketball phenomenon as she played her first pro season in China. It is currently airing as part of ESPN’s Nine for IX Shorts series. Johnson’s feature documentary, “No Look Pass,” which can be seen on Showtime, won three awards: Best Documentary at the San Francisco International Asian American Film Festival, Best Documentary at San Francisco IndieFest, and Best Documentary at the Honolulu Rainbow Film Festival. “No Look Pass” was included in the highly celebrated 2014 American Film Showcase, sponsored by the U.S. State Department and the University of Southern California.

The filmmaker’s previous experience includes co-producing a 30 for 30 film for ESPN alongside John Singleton (Boyz in the Hood.) As Senior Digital Producer for Comedy Central and BBC America, Melissa ran websites for hit television shows including “The Colbert Report” and “Top Gear.” The original web series she co-created, “The Worst Speeches of All Time,” premiered on ComedyCentral.com in August 2009 and has garnered a million views to date.