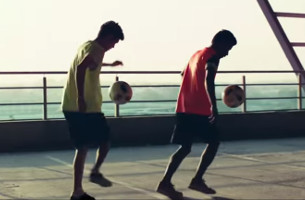 Hero MotoCorp, the national supporter of the FIFA U-17 World Cup starting October 6th in India, has kicked-off its campaign with a TVC and digital engagement from today.  The campaign has been conceptualised by Law & Kenneth Saatchi & Saatchi.
#PLAYINSPIRE is a montage of young, gritty, super-skilled footballers from across the country who are revelling in the football frenzy that has the nation hooked. With the World Cup being staged in India for the first time and India playing in a FIFA World Cup for any age-group for the first time, it’s a historic moment for the country and a great motivator for budding footballers who can now dare to dream.
Debarjyo Nandi, Sr.Vice President, Law & Kenneth Saatchi & Saatchi said about the film, “It’s rare to find work and something you love come together. So this one was special for me personally. It was also a revelation to discover the amazing football talent that exists out there. Thanks to Hero being true to their cause for football, this amazing talent pool came together for this film. It was an absolute joy to work with people who are also as passionate about football.”
view more - Creative