New social media campaign via We Are Social 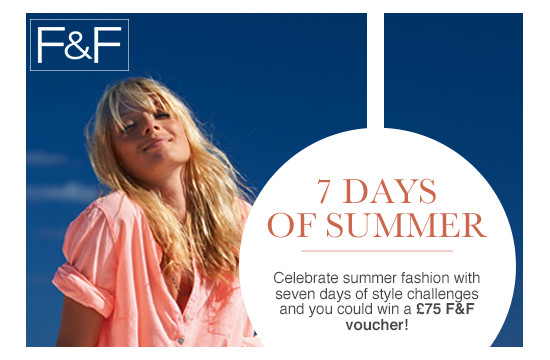 F&F Clothing and global social media agency We Are Social will launch ‘Seven Days of Summer’ today, a social media campaign which will challenge fashion fans to step outside their style comfort zone this summer.

The campaign will underline F&F’s credentials as a quality, of-the-moment fashion brand and highlight the new products in its Summer 2013 collection, as well as creating buzz within the brand’s social media channels. The campaign also marks the official launch of F&F’s UK Pinterest channel.

The campaign will celebrate summer fashion by challenging fans to create a different look every day for seven days. F&F will reveal a different trend on its Facebook page each day over the week-long campaign, asking fashion fans to replicate it in their own way. The seven looks include stripes, florals, sixties and pastels.

The best photos submitted during the campaign will be featured on the Inspire Me section of F&F website to give people real life fashion inspiration.

Deola Laniyan, account director at We Are Social, said: “This campaign will show off F&F’s summer collection in a lighthearted way that will appeal to fashion fans. F&F is all about making fashion affordable, and we’re looking forward to seeing how imaginative people are in pulling together their looks!

“There are a lot of style conscious people using social media to share their different looks, which makes it the ideal channel for F&F to engage with consumers. Every fashionista loves a challenge and I’m sure we’re going to see some really creative outfits over the campaign."