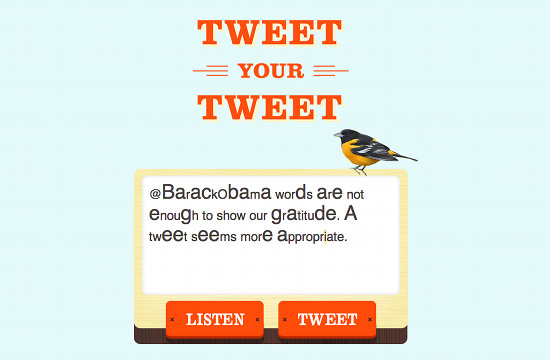 What do you do when The Onion suggests that @BarackObama has called your client “a bunch of pathetic dorks?" Well, after following the fake epic Twitter battle on The Onion between the National Audubon Society, the conservation organization, and Barack Obama (summed up here) we decided to get our client in on the joke.

Goodby Silverstein & Partner (GSP), together with Swedish music production company Dinahmoe (who were roused out of bed by GSP at midnight Swedish time), have created tweetyourtweet.com that matches bird chirps to the corresponding tones/letters (a, b, c, d, e, f, g) in your tweets.  Suddenly, your tweets are musical.

"Following The Onion's @BarackObama @AudubonSociety feud ending with an amazing #FF mention from the President to our client, we immediately jumped on the opportunity to bring more #birders into the Audubon society. We developed the perfect 'thank you' to @barackobama and a fun experience for everyone else to play with," says GSP's Chief Digital Officer, Kalle Hellzen.

Today we hope to hear more tweets from our phones and computers than we do in our backyards and parks. We'd like to see the 32 million followers of @BarackObama connect with the Audubon Society and help bring real tweeting back into our lives.

"What a harmonious way to end a 'feud'—take note, world," said Audubon President and CEO David Yarnold. "The GSP team is brilliant, as always, and may I just say that we are truly pleased to count @BarackObama among the nation's 47 million bird lovers. After all, conservation has no political party. Tweet on."

The birds are thanking you.  Can you hear it?