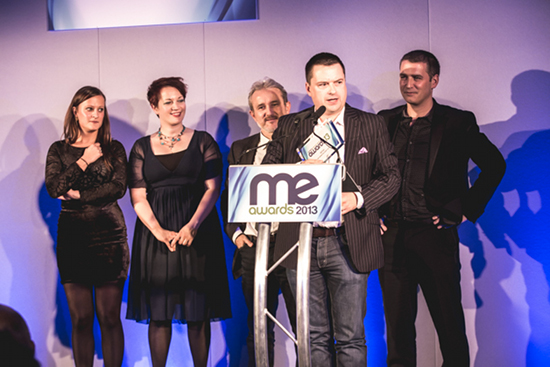 Mobile marketing agency Fetch was named Mobile Entertainment's ‘Marketing Agency Of The Year’ for an unprecedented 3rd consecutive year at the 8th Mobile Entertainment (ME) Awards in London last night. The agency also picked up best Mobile Ad Campaign for 'From eBay with Love' on the night.

The ‘Marketing Agency Of The Year’ Award rounds off Fetch’s best year since its launch in 2009, when it was founded as one of the first dedicated mobile agencies in the UK. Now with offices in London’s Tech City and Silicon Valley in the US, 2013 has seen a 100% increase in turnover YOY and also doubled in staff. Key clients include eBay, Debenhams, Supercell, Sony Music and William Hill and its teams run campaigns across 40 different countries worldwide.

One of the most prestigious annual awards in the mobile industry calendar, the ME Awards 2013 brought together over 300 executives from more than 100 companies across all sectors of the industry, including apps, augmented reality, games, music and video.

2013 has seen a surge in Fetch’s awards tally, with the agency winning accolades including Best Mobile Advertising Campaign (for eBay) in the Mobile Retail Awards 2013, Best Mobile Advertising Campaign (for William Hill) in the Mobile Gaming & Gambling Awards 2013 and being named one of Top 50 Mobile Innovators by Mobile Entertainment.