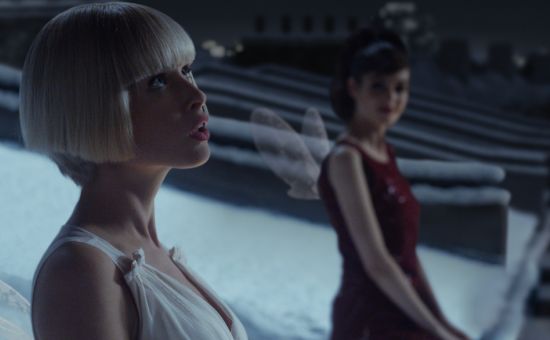 M&S has brought its 'Magic & Sparkle' strap line to life with its 2014 festive campaign starring a pair of hardworking Christmas fairies.

Magic and Sparkle, the stars of the campaign from London agency RKCR Y&R, are sharing a little kindness on their mission to brighten up the UK's Christmas. And in the TVC they're spreading their magic to the classy strains of Julie London's version of 'Fly Me to the Moon' spread a little festive kindness as the stars of the retailer’s advertising campaign. The spot was directed by Independent's Philippe Andre and the magical VFX was conjured up by MPC.

The pair of cheeky fairies have also been revealed to be behind @TheTwoFairies – the twitter based duo who have kept the nation guessing on their random acts of magic over the last seven days.
Set to the catchy classic Julie London version of ‘Fly Me to the Moon’, Magic and Sparkle take the lead role, as they clock in for a day’s work at the Fairy Factory. Soaring the city skies, the duo are eager to bring a smile to the unaware people below - gifting snow fall to children stuck in-doors, adorning grey washing lines with glittering party dresses and sparking love between a lonely pair.
Patrick Bousquet-Chavanne, Executive Director of Marketing and International at M&S said; “The magic of Christmas is how it brings out that little part in all of us that wants to believe in the extraordinary. It’s a moment to escape the realities of every day and give in to the joyfulness of the festive spirit. We wanted to capture that feeling and bring Magic and Sparkle to life in a fun and lighthearted way that spreads a little cheer.”
Taking cues from the ad,  M&S’ two fairies have been on an undercover social media mission in the run up to their TV debut, as they visited cities throughout the UK delivering kind surprises to the unsuspecting public.
Working under their twitter alias @TheTwoFairies, Magic and Sparkle have journeyed across the country. At Britain’s most southerly school, Landewednack Primary in Cornwall, children were amazed to find the school mysteriously covered in a fresh fall of snow, and the pair startled onlookers as they were glimpsed in flight above the river Tyne in Newcastle. Other fairy ‘sightings’ where reported in towns across the UK – including Birmingham, London, Glasgow and Manchester.
Via @TheTwoFairies, the pair have been responding to those posting about life’s daily problems with random acts of kindness. Treating workers on long hospital night shifts, salvaging failed dinner plans and rescuing rain-soaked commuters - are just a few of the little acts the duo have undertaken to brighten up individuals days.
At every point, the only clue has been a calling card citing @TheTwoFairies #FollowTheFairies.
Patrick Bousquet-Chavanne continued: “The real magic has not been driven by us but by the spirit of generosity the two fairies have ignited in the social community. People have not been wishing for themselves, instead they’ve taken genuine pleasure in kindness to others.”
Magic and Sparkle will continue their random acts of kindness via @TheTwoFairies for the whole festive season, supported by more magical surprises across M&S stores and online channels.
Customers can get a first look at the ad on M&S’ social channels from midday today, or catch the premiere of the TV ad during Saturday’s (8th November) X-Factor on ITV1.