‘Infinity’ is out now via Ki Records 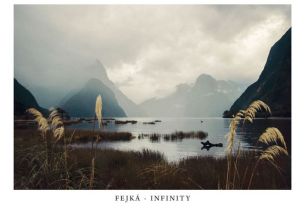 ‘Infinity’ – the new single from Fejká - is out now via Ki Records, featuring vocals from previous collaborator Marie Angerer.

Brian Zajak, aka Fejká began his musical career at the age of 17. Torn between the dreamy soft atmosphere of ambient music, and the hard punchy vibe of techno, Fejká couldn't decide which direction his music production would take. "Day/night, dream/dance, slow/fast – music was always split into two worlds for me," he says. Thus, he decided to experiment with both, showing the development process of dream music into dance music.

"Infinity is about that absolute emptiness," describes Fejká. "The one that occurs after an emotional high in life, when the realisation of what happened catches up to you." The track marries Fejká's signature ambient-techno style, alongside the soulful tender vocals of Marie Angerer. Fejká was keen to work with Angerer again, having previously collaborated on his single Ghostlight. "This song I'm back with Marie; because her soulful, tender vocals fit perfectly with my music. It also proves that her voice can be used in different ways," states Fejká.

Music creation happens on a sub-conscious level for Fejká. Finding meaning after the track itself has been created, means delving deep into his own mind. "This is a crazy feeling, when you analyse your own subconscious mind, and then decode a message which comes from yourself." The result of this organic process is ‘Infinity’, a track entrenched in emotion, whilst still maintaining the techno dance sensibilities of his previous work.

The single ‘Infinity’ is out now via Ki Records, co-founded in 2009 by producer Christian Löffler and Paul Kadow. Watch the official video for the single below.