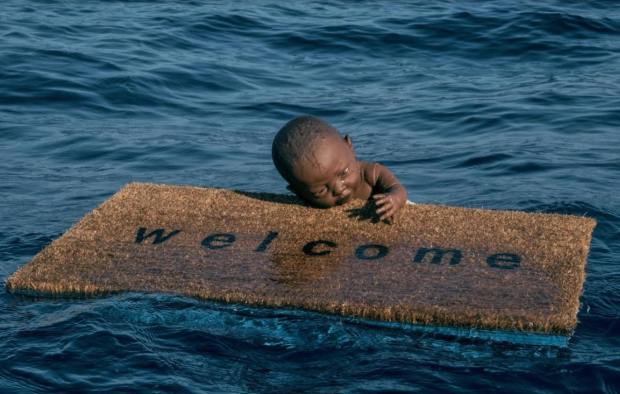 Welcome(?) is the piece of art that Federico Clapis designed and produced for Mediterranea–Saving Humans. A doormat that invites people in with the word “Welcome” and a migrant child strenuously holding on to it. A project of great symbolic value, that was released in the sea by the crew of the Mare Jonio ship with the goal of underlining the need for a real effort to save migrants in the Mediterranean Sea, especially after the Italian decreto sicurezza bis, a recently-approved law that criminalises those who save lives at sea.

Born from an idea of Federico Clapis and Sergio Spaccavento, creative director of the advertising agency Conversion, the art installation will have the work being left at the mercy of the sea at first. Its origin is, therefore, linked to a reflection about the moral duty of remaining human in front of the tragedies so often happening in our seas: the values of welcome and acceptance are amplified by the dissonance inherently present in this strong impact representation.

Maso Notarianni, Arci national director, among the founders of Mediterranea-Saving Humans, comments: “The work of art portrays and plastically tells the stories of those who, escaping war in Libya or their country’s misery, clashes with the hypocrisy of a world that says it is civilised while destroying not just the sense of humanity and solidarity, but also the law of the sea, international treaties and the Constitution".

The work will then be retrieved and auctioned, in order to raise funds to support Mediterranea–Saving Humans, an initiative born from the civil society that in these past few months has often been in the public eye for its actions of monitoring and rescue after NGOs being blocked. Recent news is the returning of the Mare Jonio ship to Mediterranean-Saving Humans, ordered on August by the Agrigento court after almost three months of requisition due to the rescue, last May, of 30 people 40 miles out of Libya.

The goal of the project is to make everyone aware of a problem that is becoming more and more urgent and that needs to be dealt with protecting each single life involved in the Mediterranean tragedy.