Awards and Events 247 Add to collection 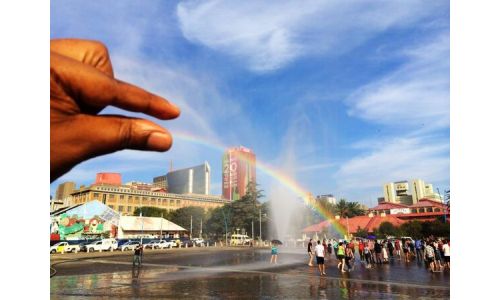 Coca-Cola South Africa’s #RainbowNation Celebration of Freedom Day has won the recognition and admiration of the world’s marketing and advertising fraternities to bring home four accolades from the leading awards of the international stage.

This is the first time a Coca-Cola campaign originating in South Africa has won in Cannes, and a major coupe for the South African marketing team to have achieved this for the global brand.

During the month of April 2014, in the build up to Freedom Day in South Africa, Coca-Cola literally created rainbows to mark the 20th anniversary of the country’s democracy and the birth of the ‘Rainbow Nation’, a phrase coined by then-Archbishop Desmond Tutu.

The rainbows were created by capturing the sun at specific angles through a mist of non-potable recycled water. The water used for the activations on Mary Fitzgerald Square in Newtown, Johannesburg, was captured by the gutters and routed back to the recycled water system.

“In the lead up to Freedom Day, we wanted to go further than reminding South Africans of our heritage. We wanted to create a symbol of our diversity and celebrate the fact that, as a nation, we have come so far. Coca-Cola aims to inspire moments of optimism and happiness, and rainbows can do both,” explains Sharon Keith of Coca-Cola South Africa.

Moments of happiness created by the Coca-Cola Rainbows were captured on film.

Jonathan Deeb, FCB Johannesburg’s executive creative director comments “I am delighted that a piece of work that we all put a huge about of love, commitment and even a leap of faith into, has paid off bountifully. In celebrating 20 years of democracy in South Africa in true Coca-Cola style, by bringing people of the Rainbow Nation together, we ended up bringing the custodians of creativity together from around the world in admiration of our work.

“We had a crazy idea that we may be able to bring people of the rainbow nation together at the end of the rainbow, and as it turns out there was some Gold there too. The pursuit of iconic work requires absolute passion and clients that believe in true partnership.”