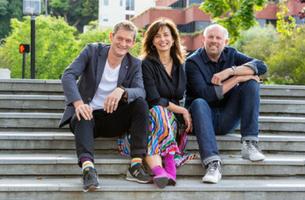 San Francisco’s FCB West, best known for its work on the Levi’s and Clorox accounts, has hired Justin Moore to partner with the recently promoted Mike Long as Co-Executive Creative Director. Moore and Long will report directly to Chief Creative Officer Karin Onsager-Birch, working across all of FCB West’s client roster while continuing to aid in the agency’s growth spurt, including the recent acquisitions of the Hotwire and Yerba Buena Center for the Arts (YBCA) accounts.
Moore joins FCB after two years at VB&P, where he oversaw the Audi account. His work on Audi gave the brand the highest-performing Super Bowl spot in its history, its best annual award performance ever, and an abundance of acclaimed work for the brand, including an emotional call for equality in “Daughter,” a Kung Fu satire in “Duel,” a white-knuckle Thanksgiving in “Parking Lot,” and a sold-out AirBnB partnership in “Desolation.” Prior to joining VB&P, Moore led the Cisco account and helped win numerous pitches at GS&P, and prior to that, he worked for 12 years at BBH London, where he wrote and oversaw iconic work for brands such as British Airways, Johnnie Walker, Audi and Axe. During this period at BBH London, Moore won several of the advertising industry’s highest honors, including multiple golds at Cannes Lions, the Clios, and D&AD, to name a few.
Long joined the FCB team in January 2017, and after a string of successes, has been promoted to Executive Creative Director. In his past year with FCB, Long’s creative direction has earned the agency four One Show pencils for the most recent Levi’s “Circles” TV spot, in addition to leading the recently won pitches for the Hotwire and Dockers accounts.
“I couldn’t be more excited about having Justin join us. I’ve been a fan of his work since long before I met him. He and Mike make a formidable ECD team,” said FCB West Chief Creative Officer Karin Onsager-Birch. “The combination of their talents, drive and collaborative spirits is going to help us continue our momentum and to drive the work for our clients to greatness.”
Commenting on his new position, Moore said, “I’m delighted to join the growing team at FCB West. We’ve got a winning combination of fabulous clients, diverse talent and a generous spirit that you can feel just by stepping through the door. We’re going to do great things, and we’re going to have a whole lot of fun doing them.”
view more - Hires, Wins & Business