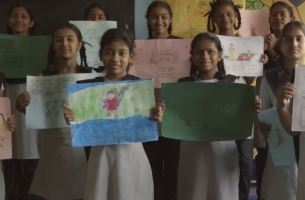 In most parts of India, the birth of a girl is considered a curse. Not surprisingly, education and a chance at a meaningful career is not at all in the cards for underprivileged girls. But, NGO Salaam Bombay is fighting to change that. The organization rightly believes that given a chance, girls could personally thrive and boost their communities.

To help Salaam Bombay garner corporate support to fund education programs for girls, advertising agency, FCB Ulka created “Project Resume,” a heart-warming campaign that illustrates the hopes and dreams of Indian girls. As quick-cut images of poor girls are shown peddling wares on dirty streets, three of the organization’s best-and-brightest prospects are shown working with a recruitment firm on their resumes. Their credentials, based on their dreams and ambitions, land them job interviews. To the surprise of HR professionals and company leaders, it’s young girls they find before them to interview, not the seasoned pros they expect to see. The corporate leaders quickly realize that they can play a critical role in making the dreams expressed by the girls on their would-be resumes a reality.

The girls took the first step in illustrating the problems they face and companies stepped up and delivered money to fund education programs. In fact, in the first month following this campaign, enough money was raised to educate more than 200 girls.