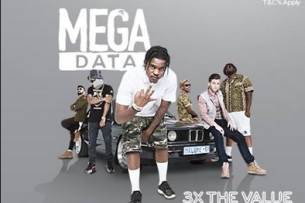 Wolf Pack founders producer Sketchy Bongo and artists Aewon Wolf and Kyle Deutsch are collaborating with the cellular service provider that puts ‘the power in your hands’, Cell C, to communicate its extraordinary data deal which gives users 3x the data each time they spend R50 or more.

Briefed to develop a through-the-line campaign that would explain the value and benefits of the new MegaData product, FCB South Africa partner agency 1886 opted to utilise the Wolf Pack and their distinctive style to grab the attention of its target market, mainly pre-paid users in the 6-8 LSM groupings.

“What makes this ad so special is the performance by Aewon Wolf and members of the Wolf Pack,” said Cell C’s Executive Head of Marketing, Doug Mattheus.

“Aewon and the pack are relatively new to the music industry but have such a distinctive and fresh style, something Cell C is keen to align with given its own slightly maverick take on the industry and the opposition.

“As soon as the ad launched consumers started to comment on the amazing song that was specifically created for it. It’s really created a buzz and lifted interest for our MegaData deal within our core market,” he said.

The ad was shot in Soweto in just two days by Egg Films’ Lebogang Rasethaba. The original sound track was composed by Sketchy Bongo Productions, and Left Post Production and Freq’ncy handled all the necessary editing.