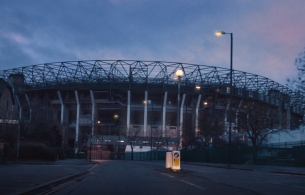 The story is told from the eyes of a fan, driving in anonymous car. Opening on a dark and desolate country road we can see the moon in the sky as the car sets off down a frosty lane, to the sound of dull and distant chant. Dawn rises as the car travels through the English countryside; we sweep past an old pub with St George’s flags in the window; later, a solitary rugby player is seen practicing in the snow; then we pass a 2003 rugby shirt hanging on a washing line. Day is dawning as the driver reaches the city, and the chant steadily grows loader, reaching a roar as it turns onto the sun-lit road to Twickenham. The iconic amphitheatre can now be seen ahead, “Swing low, sweet chariot, Comin' for to carry me home”.

BMW UK has been an RFU sponsor since 2012 and champions the game from grassroots level up. ‘The Road to Twickenham’ is designed to celebrate the shared passion that goes into rugby, and the devotion of the fans. ‘Swing Low, Sweet Chariot’ has long been a rugby anthem and features in a number of BMW’s sponsorship executions, most recently on a score-sheet drawn in tyre marks, seen on in-stadium DOOH. The rousing soundtrack heard in ‘The Road to Twickenham’ was recorded live from 90,000 fans singing at the 2014 Australia v England QBEs.

Directed by CD Morrish, and shot over five cold mornings across England, the 90” cinematic film was produced at Stink, with sound design by Angel Sound. ‘The Road to Twickenham’ will appear on You Tube mastheads and feeds, be displayed on Twickenham DOOH during the 6 Nations tournament, as well as all seeded across social media channels reaching 4 million, in a media plan managed by Vizeum.

FCB Inferno Executive Creative Director says Owen Lee says “BMW has sponsored England Rugby from grassroots right up to the elite England squad. This film is about commitment on the long road to Twickenham. It captures the journey of fans and players alike. The early mornings and relentless drive towards the World Cup, culminating at Twickenham, the home of English Rugby”.