Tarsem Singh directs an exhilarating 4000 BC ride for new campaign 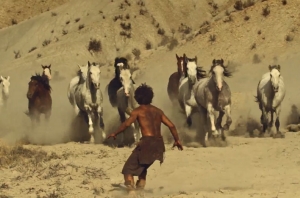 Set in the hot and dusty desert around 4000 BC a hunter-gatherer man is shown intently observing a herd of horses. He is clearly making a plan. Silently he creeps closer, then runs towards the herd and leaps onto the back of one of the horses. He flings his arms around its neck in terror as the horse thunders across the plain. Gradually the man relaxes and loosens his grip as he learns how to ride the animal beneath him. Fear gives way to exhilaration; he is travelling faster than any man has before. The film cuts to a BMW i8 gliding across the plain; the camera tracks around the car to show off its shape and movement. The car trails off with dust billowing behind it.

The idea for the film was first presented in June 2013, when FCB Inferno successfully pitched to win the BMW UK creative account. Using the brand-shaping BMW i8, this film will act as a halo for the brand work planned throughout 2015.

First airing during the X Factor final ad-break the work will be seen in a series of 60 second edits on TV, online and via social channels.

The film was directed by Grammy Award winning Tarsem who is behind movies including Mirror Mirror with Julia Roberts, The Curious case of Benjamin Button and Pepsi’s most ambitious commercial which featured Beyoncé among other music stars. The film was shot in Almeria in Spain and produced at Radical.

FCB Inferno Chief Creative Officer Al Young says “In essence, driving a BMW is about exhilaration. The emotion behind the ultimate driving machine is very primal in some respects. The first man ever to have the breakthrough idea of riding a wild horse seemed a fitting parallel for the breakthrough idea that is the i8.”

BMW UK Marketing Director Uwe Dreher says “This film showcases the BMW i8 as a game-changing car. It illustrates how the most progressive sports car ever built by BMW is at the forefront of innovation, ensuring The Ultimate Driving Machine continues set the benchmark for the automotive industry.