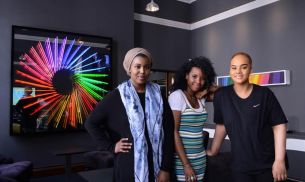 In April FCB Inferno launched an initiative with The GirlHood, to encourage a richer mix of female talent in creative departments. Nine talented 18-24 year old girls, who may otherwise have not considered a career in advertising, were selected for their creative potential to be part of a five week programme hosted by FCB Inferno. The GirlHood course, was designed to immerse the participants in the creative industry, introduce them to commercial creativity and working agency culture. The girls worked on briefs for clients including Sport England and Oreo, and at the end of the course they were required to present to CSO, Giles Hedger and CCO, Owen Lee to earn a placement at FCB Inferno.

Adela has a degree in journalism, and will act largely as copywriter at FCB. Luul also has a degree in journalism and is an avid vlogger, she will be leading elements of social media for the team. The youngest, Sophia, dropped out of university where she was studying media & comms, and has found the course a more rewarding means to develop her skills. She will largely take on an Art Direction role.

Owen Lee, FCB Inferno Chief Creative Officer says, “This whole experience has been eye opening. The work the girls are producing is refreshingly different and the attitude they bring any agency would benefit from. The speed in which they have grasped how to write campaigns has been truly outstanding”

The Girls say, “FCB Inferno has started a trail blaze of interesting into the industry. We were buzzing with excitement on the first day we walked through the doors and that feeling has yet to simmer down. Not only are we so honoured to be part of such a powerhouse agency, we are thrilled to be part of a change that will intensify the authenticity of ideas and enrich agency offices in a way that finally represents the world. It’s about time that agencies started to reassess their recruitment process. I’m so glad that FCB Inferno have actually done something about it. Diversity should not be treated as a trend but as a tool that allows a range of ideas to change the world.”

Kati Russell, GirlHood co-Founder says: “The industry must look at where its sourcing candidates from at junior level. The GirlHood is our contribution to change, we want to help shake-up the entry-level landscape, not just tackling where candidates are selected from but how we prepare them for creative futures. Being able to test our creative value curriculum in a full-time industry setting has been vital to the understanding of how we bring a richer mix of females in to the creative department. We’ve been able to challenge the girls, the agency and ourselves through our focus on character, culture and creativity.