Awards and Events 188 Add to collection

As FCBsocialEYE, Madikwa will attend key talks, workshops, events, award shows and whatever other exciting happenings she can nudge her way into 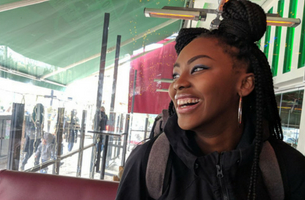 A young copywriter from FCB Joburg has just landed the gig of her lifetime (to date) – Yenani Madikwa has been selected as FCB Global’s second-annual Cannes FCBsocialEYE and receives an all-expenses paid trip to attend Cannes 2018 next month (June).
As FCBsocialEYE, Madikwa will attend key talks, workshops, events, award shows and whatever other exciting happenings she can nudge her way into, to find the best videos, quotes, images and GIFs to share with @FCBGlobal’s 110 000+ followers across Instagram, Twitter and Facebook.
#FCBsocialEYE is a competition designed to amplify the FCB network’s social presence at Cannes and better engage with junior talent. Its first-ever ‘EYE’, FCB Interface’s Cornell Rocha, was integral to FCB’s social media coverage at Cannes 2017. He was the network’s eyes and ears during festival week, and reported to us all live in a fun and clever way that showcased his energetic personality.
You can see Madikwa's auditions here,  here and here.
Commenting on her selection, Madikwa said: “I love winning stuff. I won a t-shirt & pen from a TV show once and that was awesome. But this? THIS IS AWESOMEEEER!
“A huge thank you to everyone that engaged the content, crossed fingers, said a little prayer and sent all their good juju my way. I’m very excited about the content I’ll be producing at Cannes and even more excited about the fact that it will have some South African flair.
“To yachting on the French Riviera, red carpet looks, a little champagne indulgence, brushing up on my French and being the FCBSocialEye that you deserve.”
view more - Awards and Events