The recent promotions will aim to 'grow and evolve' the agency 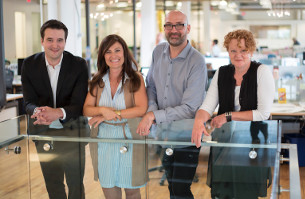 After successfully restructuring, realigning and simplifying FCB’s offering in Canada to better service its clients, Tim Bowen has been named chairman of FCB Canada. In his new role, Bowen is charged with developing long-term relationships with top clients and advancing corporate strategy in Canada.

Since joining FCB Toronto as CEO in late 2014, Tyler Turnbull has helped evolve the agency, increasing the overall business and rebuilding the network model to meet future market demands and emerging client needs. His role is also evolving: He will now be managing operations and providing leadership as CEO for FCB’s entire Canadian network, which includes FCB Toronto, FCB Montreal, FCB/SIX, and Segal Licensing, as well as Fuel Advertising.

“Over the past two years, Tim and Tyler have managed to reinvigorate FCB Toronto and FCB Canada,” said Murray. “They’ve hired amazing new talent and put creativity at the center of their operations, a focus which has paid off in spades across FCB Toronto, FCB Montreal, FCB/Six and Fuel. Since joining FCB in 2014, Tyler, with his business partners Jon and Shelley, have managed and led the transformation of FCB Toronto to make it one of FCB’s top-performing creative agencies. I’m excited about him taking an expanded role in Canada.”

Jon Flannery, who joined FCB Toronto with Turnbull in 2014 as chief creative officer, and who has been critical to the agency’s recent success, is returning to FCB Chicago to work with newly minted CCO Liz Taylor as EVP, executive creative director. Flannery has left an indelible mark on FCB Toronto, leading all creative for the agency, which has had its best awards results in 10 years, and which was nominated twice for Digital Agency of the Year by Strategy Magazine. Promoted from within to serve as co-chief creative officers, are Nancy Crimi-Lamanna and Jeff Hilts.

Under Flannery’s leadership, they have both worked on some of FCB Toronto’s most-awarded work, including: Ontario Tourism Marketing Partnership Corporation’s “Where Am I?,” OAITH’s “The Window Project” and the Ritz “Cracker Cutter” campaign.

“It has been an amazing two years in Toronto, and working with Tyler and Shelley has made it one of the best partnerships of my career,” said Flannery. “In Jeff and Nancy, we have two incredibly talented leaders who I’m as proud to have worked with as I am of the work we’ve done together. They’ll take what we’ve built here and make it even better.”

Crimi-Lamanna, a 26-year creative veteran, has numerous awards under her belt, including Canada’s first Integrated Lion at Cannes for the Ontario government’s “Social Smoking” campaign, work that was also named Warc’s Canadian Campaign of the Year and Strategy’s Campaign of the Year in 2013. A member of the advisory board for the Toronto chapter of the Miami Ad School, Crimi-Lamanna joined FCB in May 2015. Hilts, a homegrown creative, has been with FCB for nearly 11 years.

He brings a wealth of experience in almost every product category, having worked on award-winning campaigns for PFLAG, Stella Artois, Kokanee Beer, Capital One, Mondelez and MacKenzie Financial, among others. “When you see someone doing something impressive in the network, you pay attention. Jon went to Canada to help turn the agency around. In less than two years, FCB Toronto has become an agency to watch,” said Susan Credle, FCB’s global CCO. “Nancy and Jeff are a true testament to Jon’s legacy and to the growth of the talent in our network. Although partnered for only two years, the work they’ve created invites people to engage and participate with brands. I know their passion for building a culture of creative collaboration will help develop the next generation of creative talent in Toronto.”