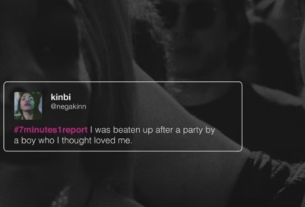 FCB Brazil partnered with Estado, a leading newspaper in Brazil, to raise awareness of the prevalence and severity of violence against women and the importance of speaking up.

And so, to raise awareness of this problem, Estado tweeted one real report of violence against women – using the hashtag #7minutos1denuncia (#7minutes1report) — every seven minutes throughout International Women’s Day.

"The only way to fight violence is by talking about the problem, which is frighteningly prevalent! Estadão's positioning is to promote debate on the subject today in order to create a better future. This action helped mobilize people against this extremely relevant issue," said Joanna Monteiro, chief creative officer of FCB Brasil

Marcelo Moraes, Estadão's Director of Publicity Marketing, says, “This effort used the power of social media to draw attention to an important issue. It's a different way to approach one of the subjects Estadão has been covering in its editorial content.”