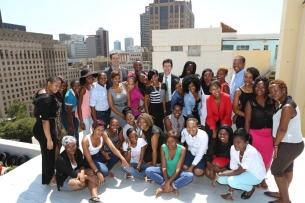 FCB Africa has concluded a BBBEE deal that it believes will have a profoundly positive influence on young black women as well as a major impact on South Africa’s economy in the years ahead.

These shares will be held in a broad-based black economic empowerment trust, and 100% of all profits made in respect of these shares, once they are paid off, will be used to empower unemployed young women who will own an equity stake in the company, with a comprehensive career package that facilitates true lifelong empowerment, including access to university-level business degrees with a specialisation in advertising and digital marketing, industry-recognised vocational skills qualifications, full-time employment, personal development, soft skills training and ongoing hands-on coaching and mentorship.

This holistic approach with a range of other support measures over a number of years, will assist these women to become measurably successful in South Africa’s economy. The move is targeted to strengthen the long-term pipeline of new industry professionals.

In addition, outside of its ownership programme, FCB has committed to an additional financial investment to develop a cutting-edge industry-related curriculum in 2016, followed by a pilot program in 2017 and 2018, which will be part of the industry preparation component.  FCB is warmly inviting other agencies and industry colleagues to join it in developing this pipeline for the industry.

FCB’s first BBBEE deal was concluded in 2003 when a consortium called Bourasque acquired 26% of the agency. At that time, shares were also awarded to previously disadvantaged individuals who worked for FCB.

Announcing the deal, FCB Africa CEO Brett Morris could barely contain his enthusiasm: “As a company that has always been at the forefront of transformation in the advertising sector, this is an incredibly exciting step for us, and one that rounds off a very inclusive and broad-based approach to our economic empowerment initiatives. In addition to prominent business people and the staff ownership we are proud to now include a broad-based scheme that will impact hundreds of young women over time,” Morris enthused.

“Yes, I’m delighted that the deal means that FCB more than ticks all the boxes when it comes to the BEE scorecard. Yes, I’m thrilled that our new status – 51% black owned and 32% black female owned – is a major advantage for our clients when it comes to filling in their own BEE scorecards. But I’m over the moon at the potential this deal could unleash over the years, and look forward to witnessing the impact the graduates will have on South Africa’s economy as they succeed in the workforce as empowered, skilled and well-educated citizens.”

FCB Worldwide CEO, Carter Murray, added: “Brett and his team at FCB Africa have been searching for a BBBEE initiative that truly aligns with the group’s moral compass and, in the vision and daily work of the Maharishi Institute; they have found it.

“We’re all particularly pleased that partnering with the Institute in this way will have an exponential benefit over time. Particularly as, given the realities of South Africa, assisting one woman usually provides assistance to many others who rely on her for support, so the impact will be far-reaching,” he said.

“The Maharishi Institute was created in 2007 to support unemployed youth in a fully holistic way through co-locating a comprehensive range of services, that to date has produced success with over 99% of the graduates getting employed. It includes the worldwide breakthrough of consciousness-based education, which develops the full potential of each student,” said Institute CEO and co-founder, Taddy Blecher.

“More than that, we wanted to provide a supportive environment to ensure that our students, who come out of South Africa’s high schools in great need of work experience to make them highly employable, are supported step by step in order to achieve a life of success and achievement.

“We are delighted to partner with FCB Africa, whose passion and vision for our country mirrors our own.”