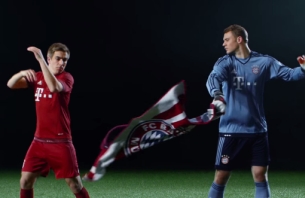 Today sees the launch of the Everything FC Bayern Munich campaign for the world’s most international business, DHL.  The campaign, created by 180 Amsterdam, will launch the DHL FC Bayern Munich online fan shop in China on 27th May, as well as being premiered online and at the Allianz Arena in Munich, at the FC Bayern vs. Mainz match.

Creative agency 180 Amsterdam, was tasked with creating a launch campaign that would truly reflect the enormous passion Chinese football fans have for FC Bayern Munich and give them a unique perspective on the stars of their favourite club.

The film at the centre of the campaign presents some of Bayern Munich’s most famous players in a range of surprising and hilarious scenes alongside a selection of the FC Bayern Munich merchandise from the new fan shop.  While we see the usual club shirts, balls and towels being modeled by the players, we also see midfielder Arjen Robben determinedly dunking his tea bag in an FC Bayern Munich mug, club goalkeeper Manuel Neuer lunging to catch a novelty gnome and forward Thomas Müller dons lederhosen for a traditional Bavarian slap dance.

Al Moseley, President and Chief Creative Officer, 180 Amsterdam, commented: “Our and DHL’s ambition for this campaign was to turn what could have been a straightforward launch moment into something much more culturally resonant. This campaign is for the fans of FC Bayern Munich both in China and across the world. FC Bayern Munich, like DHL, is a truly global brand, and we wanted fans everywhere to enjoy this campaign.”