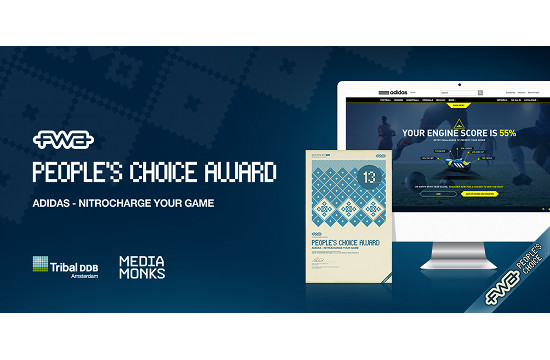 Today sees Nitrocharge Your Game, adidas’ interactive web platform, receive the FWA People’s Choice Award 2013 (FWA PCA 2013). The platform, created by DDB & Tribal Worldwide, Amsterdam and produced by MediaMonks, had already won the FWA Site of the Month, FWA Site of the Day and Mobile of the Day awards earlier in 2013.

Every year, the FWA (Favourite Website Award) crowns one website worldwide with FWA People’s Choice Award 2013 (FWA PCA 2013). The winner of a year long global competition is selected by an international public vote from 12 Site of the Month Winners. Nitrocharge Your Game campaign received over 25% of total votes.

"This year's contest for the FWA People's Choice Award 2013, must be one of the toughest ever. With so many incredible projects that pushed technology to heights we'd never seen before. It was an absolute delight to see adidas - Nitrocharge your game, a project that combined established technology with the very latest technology, to deliver and very progressive and exciting experience across dual screens. It showed how the idea is always the winner, rather than the actual technology itself. With FWA's audience voting adidas - Nitrocharge your game as their PCA for 2013, it showed just how impressive this project was and how indeed, 'winning never quits'... NITROCHARGE YOUR GAME!" Rob Ford, FWA Founder

Wesley ter Haar, Founder and COO of MediaMonks commented: "What an amazing honour to become part of the PCA lineage. It’s humbling to think about the projects that have gone before, and we’re immensely proud to have had the public vote for our work as their favourite. It’s a celebration of the passion and dedication everyone brought to the table, and the creative bravery shown by adidas and DDB & Tribal Worldwide, Amsterdam."

Bart Mol, Creative Director at DDB & Tribal Worldwide, Amsterdam said: “I’m completely flabbergasted, I did not expect to win at all against competition this strong. It has been a passionate project for us, with a lot of setbacks we had to overcome. I’m truly honoured to see our project in the same list as the great winners of the previous years, projects which I respect immensely. Thank you to everyone who voted for our site.”

Pol Hoenderboom, Creative Director at DDB & Tribal Worldwide, Amsterdam added: “Picking up a Site of the Month was already incredible. But this…Wow, I still can’t believe it. It was our first official campaign for adidas and what a great project it turned out to be. A big thanks to everybody who voted for us, it’s a true honour. I’m expecting to become a dad in a few days, so I said to myself not to drink too much these days…But I guess this changes everything!”

The interactive Nitrocharge Your Game platform has been developed as a part of the integrated campaign launching the latest adidas football boot in 2013. Using their mobile phone as the game controller, fans could interact with the website and play an interactive game in which all features of the boot were revealed.