Father Critmas Roasts a Creative Team in This Festive Campaign 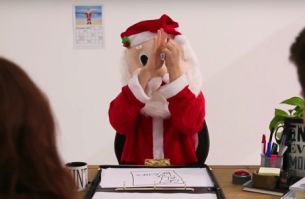 What do creative directors in New York, London, Ottawa, Munich, and Manchester have in common? For the first time ever, the answer is Merry Critmas - a festive campaign encouraging ad agency staffers to give a book crit this December.

The idea is simple - Save a turkey, roast a creative at merrycritmas.com

Visitors to the website pick a side, choosing to either ‘roast a creative’ or ‘get roasted’. After sharing a few details, campaign mascot Father Critmas makes those all important matches between senior industry staff and aspiring creatives.

Merry Critmas came from a conversation between copywriter Alex Goddard with creative team Asa Bradshaw and David Felton about how difficult it is for young creatives to even get a book crit these days.

“People are a little kinder in December,” said Alex, and the idea grew from there.

“For undiscovered talent trying to break into advertising, it’s the perfect gift,” said Asa and David. “And for established creatives it’s an easy way of giving something back. Just half an hour of their time can make a real difference. And you never know who might walk through the door.”

After discussing the idea with Nick Entwistle, Creative Director at MAGNAFI & founder of One Minute Briefs, the idea began to be brought to life as we created a film featuring one of Father Critmas’ infamous book crits. Then the collaboration grew further, with Trunk creating some amazing illustrations & building the website merrycritmas.com

“Here at Magnafi we’re all about collaboration,” said Nick Entwistle. “When people collaborate, anything is possible. We witnessed that last year when we helped the NHS Choir beat Justin Bieber to Xmas No1. So, when Alex, Asa and David got in touch about Merry Critmas we couldn’t resist the chance to get involved and bring others on board to something special for the creative industry this Christmas.”

As part of the campaign Father Critmas will be tweeting from his very own Twitter feed, @OneMinuteBriefs will be running a day brief and @AgencyQuotes will be getting involved with Christmas cards being sent out in December.

With a number of top creatives already on board, including Vikki Ross, Rory Sutherland & Tom Richards, we are looking to grow the campaign and help to bring the creative industry together for a very #MerryCritmas.