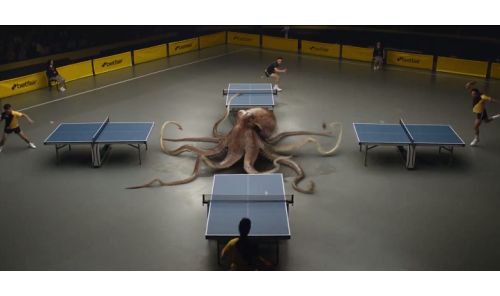 Betfair, one of the world's largest online sports betting operators, has today launched a new brand campaign to coincide with the 2014 World Cup.

The integrated campaign – spanning TV, digital and press - features Betfair’s new strapline “This is Play”. This is dramatized by a heroic Octopus who mirrors customers’ ability to experience Betfair’s superior technology by playing four simultaneous games of table tennis.

The quirky campaign is a deliberate move away from industry stereotypes and will run as part of Betfair’s Gold partner deal with ITV’s World Cup coverage, set to reach a huge recreational audience.

The 30” TV commercial was directed by Walter Stern at Academy Films and will be further supported by 30” product and offer spots to be released throughout the summer.

The adverts move away from industry stereotypes because Betfair itself is different; products such as “Cash Out” and “Price Rush” give our customers better tools to play with.  Simply put, we supercharge our customers betting experience”.

Leon Jaume, Executive Creative Director at WCRS said: “If I were a betting man – which I am – I would say, when you have a unique product in a crowded market and a courageous client, you should properly go for it”.