‘Families Reunited’ will launch on YouTube and run across VOD, social and out-of-home, with the tagline ‘the little things that bring us together’ 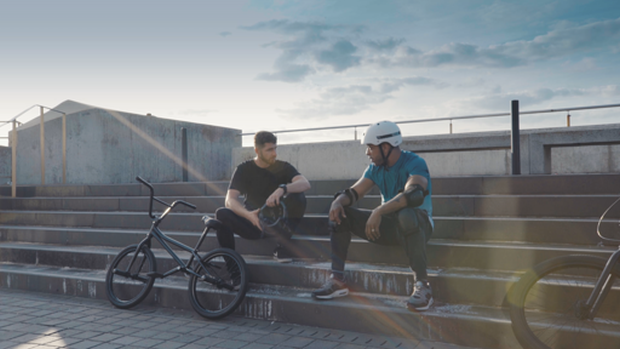 Cadbury Heroes has today launched the first episode of its original series ‘Families Reunited’. They worked with the series director and producer of BAFTA-winning ‘First Dates’ to create a show that features real parents trying to reconnect with their distant teens.

Research conducted by Cadbury Heroes shows that over half (55%) of families feel disconnected with their children as they reach teenage years. They develop their own interests that separate them from their parents, who struggle to keep up with what their kids are into.

To rebuild the bond between parents and their teens, Cadbury encouraged parents to go that extra mile to reconnect and secretly put them on a crash course in their teens’ hobbies. All in the hope of giving them a shared interest to bond over.

Episode one ‘Biker Dad’, focuses on the story of a dad, who hasn’t been on a bike in 15 years, learning to ‘bike storm’ like his son. Episode two ‘Skater Mum’, which launches on 23rd October, focuses on a truck-driving mum learning to figure skate just like her eldest son. But do they pull it off?

The campaign encourages parents to embrace their teenagers’ interests, rather than reject them. As said by Heru, the biking dad: “it’s really important for me to reconnect with him over something that he enjoys, rather than something I enjoy.”

Aislinn Campbell, brand manager at Cadbury said: “Cadbury Heroes 20th anniversary felt like a wonderful opportunity to celebrate what makes this product so special. It brings together everyone’s favourite Cadbury brands in miniature form, meaning there is something for all the family. Cadbury Heroes has been part of shared family moments for two decades and creating our new original series, Families Reunited, allowed Heroes to play an active role in helping disconnected families build stronger bonds.”

Chris Birch and Jonny Parker, creative directors at VCCP added: “As our kids grow up, family time gets pressured with the busyness of life and teenagers becoming more independent. We wanted to bring this wonderful human story to life on a bigger canvas: the sadness over a broken bond, the lengths our parents go to in order to bond with their kids, and the surprise and excitement of the kids when they realise how much their mum or dad cares. Our show, Families Reunited, sees parents train up in their kids’ interest to reconnect with them. And that’s what Cadbury Heroes are, the little chocolates that can bring the family together."