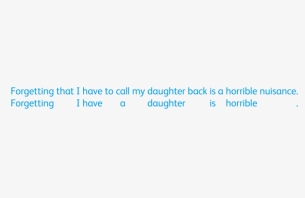 Alzheimer’s Society launches the next phase of its national brand campaign, to support the launch of the emotional ‘Gone’ TVC which was launched last week.

The emotive print ads, are creatively in line with the ‘Fade’ Cinema commercial, which preceded screenings of the Oscar and BAFTA winning film ‘Still Alice’, starring Julianne Moore as a linguistics professor who is diagnosed with early-onset Alzheimer’s.

The three executions are running nationally in standard press, OOH formats and digital OOH. Created by Oli Rimoldi and Sigi Egedal, and designed by Dan Montgomery, each execution shows copy fading to illustrate the stark reality of life for those with the disorder. For example, the text "It's dreadfully irritating when my husband forgets to pick me up from the station" fades to "It's dreadful when my husband forgets me", showing the progression of Alzheimer's.

The campaign aims to not only portray the devastating and isolating effects of living with dementia, but also to reassure people that through care, advice and research, Alzheimer’s Society can help keep people connected to those they love for longer and that life doesn’t end when dementia begins.

Linda Seaward, Head of Marketing, Alzheimer’s Society, said, “It’s really important that people not only understand the isolation and disconnection experienced by many people with dementia, but know that Alzheimer’s Society is here for them. This campaign does this job beautifully”.

Nick Bell, Executive Creative Director, Fallon said, “It’s not everyday you want your client in tears when you present a creative idea but on this occasion, it was the best reaction we could have asked for”.

Media for the campaign was planned and bought by Omnicom Media Group’s M2M, who won the media business for Alzheimer’s Society last year. The media strategy focuses on driving an emotional connection with the audience, presenting a campaign of scale and importance across each channel.

Fallon was appointed as lead creative agency for Alzheimer’s Society in April last year following a competitive pitch. The charity’s investment in its brand is part of its five-year plan to ensure people living with dementia, and their families, know where to go when support is needed.