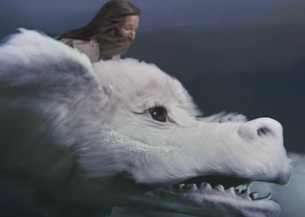 Spotify has just launched a new brand campaign that brings Falkor, Flo Rida and some rocking nuns together to show the power of the community-driven music platform. The first campaign created with agency partner Wieden+Kennedy New York marries memorable visuals and ear-worm tracks to tell the stranger-than-fiction stories that live within Spotify.

The new campaign kicks off with spots that link music, and the Spotify experience with cultural events--whether it’s the election campaign that’s dominating the news, or people’s enduring love for Falkor the furry dragon from '80s fantasy movie, The NeverEnding Story.  The ad even brings back both Noah Hathaway and Alan Oppenheimer who originally starred as Atreyu and the voice of Falkor, respectively. The spots were directed by Tim Godsall of Anonymous Content and begin airing Monday (3/28) on TV, in cinema and online. Digital and OOH -- including a life size mural of Falkor hand painted in Williamsburg (up now) -- all drive to custom playlists available for free to all Spotify and non Spotify users.

The inspiration for the campaign: stories. Behind every track on Spotify, there is a story. A story that’s been written by its community of music lovers. Like, did you know that song from that '80s movie with the giant dragon-dog is streamed at least once every day by someone in the world? And did you know the Pope has a rock album? Or that Flo Rida keeps popping up in playlists about moving? So if you’re thinking about a move to a Canadian city this November, know that a lot of others nearby will be packing to the tunes of “My House.”