Eyes On the Prize: The Rise of the Female Super Athlete

The Influencers 256 Add to collection 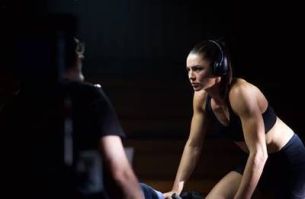 Victory defines sporting lives. If you’re an elite athlete, it gives you purpose. Its achievement can validate years of pre-dawn alarms, missed social events, and Christmas morning training sessions, all in a single, unforgettable crescendo of human excellence.

That said, the rewards are rarely just emotional. Elite athletes are often paid well for winning tournaments, and sponsorship deals regularly reward athletes even more handsomely than the prize funds that accompany their achievements.

As cult writer David Foster Wallace wrote in String Theory, one of his many iconic essays about tennis, our culture “revere[s] athletic excellence, competitive success, and it's more than lip service we pay; we vote with our wallets. We'll pay large sums to watch a truly great athlete […] and will even go so far as to buy products and services he endorses.”

This seems inherently logical. Society - including marketing, the lens that reflects our collective desires - rewards the victors more than those they’ve beaten, in everything from politics to our financial markets.

As a society of wannabe winners, why wouldn’t we seek inspiration from some of popular culture’s most visible champions?

Gillette played on this for years, with their “the best a man can get” campaign. The entire premise was that champions – Tiger Woods, Roger Federer, Thierry Henry – stayed at the top of their game by shaving with a certain razor. The stars suited the campaign (and sold razors) entirely because they were the very best in their respective fields.

This direct relationship between elite ability and commercial viability doesn’t hold in women’s sports. Hugely individual and hyper-commoditised, the female tennis circuit is a marketer’s dream. However, unlike in many men’s sports, it’s not the best players who necessarily take home the biggest paychecks.

Top level tennis is all about spectacle. The sport’s individuality scrutinises the players, with everything from broadcast techniques to the mechanics of the game placing huge focus on personal tics and foibles. Meanwhile, an extra level of pageantry is added by the brands and logos plastered across every racket, towel, and expensive ticket within the stadium. When watching a top level tennis match, it’s hard to escape the feeling that everything is for sale, from the audience’s lifestyle choices to the drinks bottles in the players’ hands.

This naked commercialism is reflected in where brands spend their sponsorship money: the most marketable players are not necessarily those playing the best and winning tournaments. Rather, they are those who look most appealing on court.

In 2015, the British magazine SportsPro listed Eugenie Bouchard as the most marketable athlete in the world, ahead of Champions League winning footballer Neymar, and multi-Major winning golfer Jordan Spieth.

Despite showing initial promise, Bouchard is yet to win a Grand Slam, and is currently ranked only 42nd in the world.

The most marketable female tennis players are, like Bouchard, often blonde and conventionally beautiful, regardless of the weight of their trophy cabinet. As legendary ex-pro Chris Evert says, “the corporate world still loves the good looking blonde girls”.

So far, so predictably entrenched gender stereotypes. However, this point of view is not limited to marketers, as professional tennis players also regularly discuss the issue in similar terms. Andrea Petkovic, a top ranking German player, has previously said that she “loathed” images of her playing two-handed backhand strokes, since they showed her arms at their bulkiest. She says that she would “love to be a player that is proud of her body”, but is made to feel self-conscious by the constant scrutiny she receives as a prominent female athlete.

She’s not alone in this: many top female players see being comfortable in their own appearance (see also: their marketability) as directly conflicting with their ability to hit the ball harder, or to move faster.

In other words, many players see their ability to win tournaments - to be elite - as compromised by gendered societal expectations.

One woman has stood at odds with this conflict for nearly two decades: Serena Williams, the first elite female athlete.

She has won twenty two majors. She has dominated the competition so completely that the act of winning four majors in a row – which, uniquely, she has done twice – is widely known as a Serena Slam.

She is the most successful tennis player of all time.

Despite this, she has been relentlessly booed (and allegedly abused) by hometown crowds. Umpires have been removed from rosters for suspiciously poor calls against her. She and her sister Venus have been mocked as “brothers” by Russian Tennis Federation officials.

To say the least, she divides opinion.

Serena’s complex status isn’t solely a result of her being a woman – at least, not exclusively. She is also a lightning rod for commentary and criticism on race relations in the USA, a position that is only accentuated by her status as a prominent female athlete.

Her status as serial winner has seen her entire identity, particularly her femininity, repeatedly called into question. Wherever and whoever she plays, she is gawked at and furiously critiqued.

Despite this, Serena is indisputably the most powerful player on the female circuit, both physically and culturally. In a sport where players appear constantly caught between being competitive (good to watch) and marketable (nice to watch), Serena, despite being more talked about than anyone on the tour, is solely focused on winning. This is what makes her a champion.

As the first truly elite female athlete, Serena has broken new ground, and escaped the limiting stereotypes around female sporting identities. In doing so, she has cleared the path for younger players to follow her lead. Heather Watson and Madison Keys, two of the tour’s hottest prospects, have both railed against expectations of what female tennis players should look like. When questioned about her physique, Watson’s response was emphatic: “I actually like looking strong”.

The most appropriate final word on Serena’s impact can only come from Eugenie Bouchard, SportsPro’s sponsorship pick of 2015. After a disappointing season last year (despite her commercial appeal), she too has embraced what it truly takes to become a champion, saying: “If it’s what it takes to become elite, who cares what I look like?”

The game has changed.